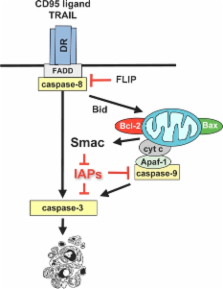 Betulinic acid is a natural product with a range of biological effects, for example potent antitumor activity. This anticancer property is linked to its ability to induce apoptotic cell death in cancer cells by triggering the mitochondrial pathway of apoptosis. In contrast to the cytotoxicity of betulinic acid against a variety of cancer types, normal cells and tissue are relatively resistant to betulinic acid, pointing to a therapeutic window. Compounds that exert a direct action on mitochondria present promising experimental cancer therapeutics, since they may trigger cell death under circumstances in which standard chemotherapeutics fail. Thus, mitochondrion-targeted agents such as betulinic acid hold great promise as a novel therapeutic strategy in the treatment of human cancers.

The hallmarks of cancer.

G Evan,  Karen H. Vousden (2001)
Beneath the complexity and idiopathy of every cancer lies a limited number of 'mission critical' events that have propelled the tumour cell and its progeny into uncontrolled expansion and invasion. One of these is deregulated cell proliferation, which, together with the obligate compensatory suppression of apoptosis needed to support it, provides a minimal 'platform' necessary to support further neoplastic progression. Adroit targeting of these critical events should have potent and specific therapeutic consequences.

The pathophysiology of mitochondrial cell death.

Guido Kroemer,  Douglas R. Green (2004)
In the mitochondrial pathway of apoptosis, caspase activation is closely linked to mitochondrial outer membrane permeabilization (MOMP). Numerous pro-apoptotic signal-transducing molecules and pathological stimuli converge on mitochondria to induce MOMP. The local regulation and execution of MOMP involve proteins from the Bcl-2 family, mitochondrial lipids, proteins that regulate bioenergetic metabolite flux, and putative components of the permeability transition pore. MOMP is lethal because it results in the release of caspase-activating molecules and caspase-independent death effectors, metabolic failure in the mitochondria, or both. Drugs designed to suppress excessive MOMP may avoid pathological cell death, and the therapeutic induction of MOMP may restore apoptosis in cancer cells in which it is disabled. The general rules governing the pathophysiology of MOMP and controversial issues regarding its regulation are discussed.