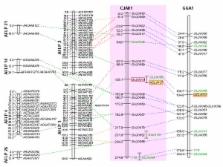 By comparing the quail genome with that of chicken, chromosome rearrangements that have occurred in these two galliform species over 35 million years of evolution can be detected. From a more practical point of view, the definition of conserved syntenies helps to predict the position of genes in quail, based on information taken from the chicken sequence, thus enhancing the utility of this species in biological studies through a better knowledge of its genome structure. A microsatellite and an Amplified Fragment Length Polymorphism (AFLP) genetic map were previously published for quail, as well as comparative cytogenetic data with chicken for macrochromosomes. Quail genomics will benefit from the extension and the integration of these maps.

The integrated linkage map presented here is based on segregation analysis of both anonymous markers and functional gene loci in 1,050 quail from three independent F2 populations. Ninety-two loci are resolved into 14 autosomal linkage groups and a Z chromosome-specific linkage group, aligned with the quail AFLP map. The size of linkage groups ranges from 7.8 cM to 274.8 cM. The total map distance covers 904.3 cM with an average spacing of 9.7 cM between loci. The coverage is not complete, as macrochromosome CJA08, the gonosome CJAW and 23 microchromosomes have no marker assigned yet. Significant sequence identities of quail markers with chicken enabled the alignment of the quail linkage groups on the chicken genome sequence assembly. This, together with interspecific Fluorescence In Situ Hybridization (FISH), revealed very high similarities in marker order between the two species for the eight macrochromosomes and the 14 microchromosomes studied.

Integrating the two microsatellite and the AFLP quail genetic maps greatly enhances the quality of the resulting information and will thus facilitate the identification of Quantitative Trait Loci (QTL). The alignment with the chicken chromosomes confirms the high conservation of gene order that was expected between the two species for macrochromosomes. By extending the comparative study to the microchromosomes, we suggest that a wealth of information can be mined in chicken, to be used for genome analyses in quail.

Rates of nucleotide substitution in primates and rodents and the generation-time effect hypothesis.

Anne B. Chang,  D Hewett,  J Krushkal … (1996)
DNA sequence data from introns, flanking regions, and the eta globin pseudogene region all show a significantly higher rate of nucleotide substitution in the Old World monkey lineage than in the human lineage after the separation of the two lineages, or, in other words, the data support the hominoid rate-slowdown hypothesis. Data from both protein sequences and DNA sequences show that the rate of evolution is significantly higher in the rodent lineage than in the primate lineage. Furthermore, DNA sequences from introns show that the rate of nucleotide substitution is at least two times higher in rodents than in higher primates. The male-to-female ratio of mutation rate is estimated to be between 3 and 6 in higher primates, whereas it is only 2 in mice and rats. These ratios are similar to the corresponding male-to-female ratios of germ cell divisions in higher primates and in rodents, suggesting that errors in DNA replication during germ cell division are the primary source of mutation, or, in other words, mutation is largely DNA replication-dependent. This conclusion provides further support for the generation-time effect hypothesis.

Maarten van den Berge,  S Blair Hedges (2001)
Molecular clocks can be calibrated using fossils within the group under study (internal calibration) or outside of the group (external calibration). Both types of calibration have their advantages and disadvantages. An internal calibration may reduce extrapolation error but may not be from the best fossil record, raising the issue of nonindependence. An external calibration may be more independent but also may have a greater extrapolation error. Here, we used the advantages of both methods by applying a sequential calibration to avian molecular clocks. We estimated a basal divergence within birds, the split between fowl (Galliformes) and ducks (Anseriformes), to be 89.8 +/- 6.97 MYA using an external calibration and 12 rate-constant nuclear genes. In turn, this time estimate was used as an internal calibration for three species-rich avian molecular data sets: mtDNA, DNA-DNA hybridization, and transferrin immunological distances. The resulting time estimates indicate that many major clades of modern birds had their origins within the Cretaceous. This supports earlier studies that identified large gaps in the avian fossil record and suggests that modern birds may have coexisted with other avian lineages for an extended period during the Cretaceous. The new time estimates are concordant with a continental breakup model for the origin of ratites.

MapChart Software for the Graphical Presentation of Linkage Maps and QTLs