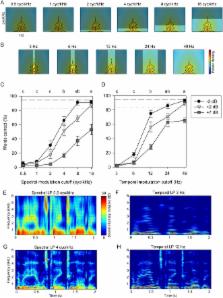 The sound signal of speech is rich in temporal and frequency patterns. These fluctuations of power in time and frequency are called modulations. Despite their acoustic complexity, spoken words remain intelligible after drastic degradations in either time or frequency. To fully understand the perception of speech and to be able to reduce speech to its most essential components, we need to completely characterize how modulations in amplitude and frequency contribute together to the comprehensibility of speech. Hallmark research distorted speech in either time or frequency but described the arbitrary manipulations in terms limited to one domain or the other, without quantifying the remaining and missing portions of the signal. Here, we use a novel sound filtering technique to systematically investigate the joint features in time and frequency that are crucial for understanding speech. Both the modulation-filtering approach and the resulting characterization of speech have the potential to change the way that speech is compressed in audio engineering and how it is processed in medical applications such as cochlear implants.

M Ekelid,  V V Kamath,  F. Zeng … (1995)
Nearly perfect speech recognition was observed under conditions of greatly reduced spectral information. Temporal envelopes of speech were extracted from broad frequency bands and were used to modulate noises of the same bandwidths. This manipulation preserved temporal envelope cues in each band but restricted the listener to severely degraded information on the distribution of spectral energy. The identification of consonants, vowels, and words in simple sentences improved markedly as the number of bands increased; high speech recognition performance was obtained with only three bands of modulated noise. Thus, the presentation of a dynamic temporal pattern in only a few broad spectral regions is sufficient for the recognition of speech.

Speech recognition in noise as a function of the number of spectral channels: comparison of acoustic hearing and cochlear implants.

R Plomp,  R Drullman,  J Festen (1994)
The effect of smearing the temporal envelope on the speech-reception threshold (SRT) for sentences in noise and on phoneme identification was investigated for normal-hearing listeners. For this purpose, the speech signal was split up into a series of frequency bands (width of 1/4, 1/2, or 1 oct) and the amplitude envelope for each band was low-pass filtered at cutoff frequencies of 0, 1/2, 1, 2, 4, 8, 16, 32, or 64 Hz. Results for 36 subjects show (1) a severe reduction in sentence intelligibility for narrow processing bands at low cutoff frequencies (0-2 Hz); and (2) a marginal contribution of modulation frequencies above 16 Hz to the intelligibility of sentences (provided that lower modulation frequencies are completely present). For cutoff frequencies above 4 Hz, the SRT appears to be independent of the frequency bandwidth upon which envelope filtering takes place. Vowel and consonant identification with nonsense syllables were studied for cutoff frequencies of 0, 2, 4, 8, or 16 Hz in 1/4-oct bands. Results for 24 subjects indicate that consonants are more affected than vowels. Errors in vowel identification mainly consist of reduced recognition of diphthongs and of confusions between long and short vowels. In case of consonant recognition, stops appear to suffer most, with confusion patterns depending on the position in the syllable (initial, medial, or final).

Publisher ID: 08-PLCB-RA-0819R3
DOI: 10.1371/journal.pcbi.1000302
PMC ID: 2639724
PubMed ID: 19266016
Copyright statement: Elliott, Theunissen. This is an open-access article distributed under the terms of the Creative Commons Attribution License, which permits unrestricted use, distribution, and reproduction in any medium, provided the original author and source are credited.