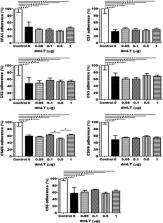 Double-mutant heat-labile toxin (dmLT, LT R192G/L211A) of enterotoxigenic Escherichia coli (ETEC) is an effective mucosal adjuvant. Recent studies have shown that dmLT also exhibits adjuvanticity for antigens administered parenterally. In this study, we subcutaneously (SC) immunized mice with the ETEC adhesin-based vaccine, CFA/I/II/IV MEFA (multiepitope fusion antigen), adjuvanted with dmLT and examined the impact of dmLT on antibody responses specific to the seven adhesins in the vaccine construction [CFA/I, CFA/II (CS1, CS2, CS3) and CFA/IV (CS4, CS5, CS6)]. Mice were immunized with a fixed dose of CFA/I/II/IV MEFA and ascending doses of dmLT adjuvant (0, 0.05, 0.1, 0.5 or 1.0 µg) to assess the potential dmLT dose response relationship. Data showed that dmLT enhanced systemic antibody responses to all seven antigens (CFA/I, CS1-CS6) targeted by MEFA in a dose-dependent way. The adjuvant effect of dmLT on the MEFA construct plateaued at a dose of 0.1 µg. Results also indicated that dmLT is an effective parenteral adjuvant when given by the SC route with the ETEC adhesin MEFA vaccine and that antibody enhancement was achieved with relatively low doses. These observations suggest the potential usefulness of dmLT for parenteral ETEC vaccine candidates and also perhaps for vaccines against other pathogens.

Structure and function of cholera toxin and the related Escherichia coli heat-labile enterotoxin.

Jacob Spangler (1992)
Cholera and the related Escherichia coli-associated diarrheal disease are important problems confronting Third World nations and any area where water supplies can become contaminated. The disease is extremely debilitating and may be fatal in the absence of treatment. Symptoms are caused by the action of cholera toxin, secreted by the bacterium Vibrio cholerae, or by a closely related heat-labile enterotoxin, produced by Escherichia coli, that causes a milder, more common traveler's diarrhea. Both toxins bind receptors in intestinal epithelial cells and insert an enzymatic subunit that modifies a G protein associated with the adenylate cyclase complex. The consequent stimulated production of cyclic AMP, or other factors such as increased synthesis of prostaglandins by intoxicated cells, initiates a metabolic cascade that results in the excessive secretion of fluid and electrolytes characteristic of the disease. The toxins have a very high degree of structural and functional homology and may be evolutionarily related. Several effective new vaccine formulations have been developed and tested, and a growing family of endogenous cofactors is being discovered in eukaryotic cells. The recent elucidation of the three-dimensional structure of the heat-labile enterotoxin has provided an opportunity to examine and compare the correlations between structure and function of the two toxins. This information may improve our understanding of the disease process itself, as well as illuminate the role of the toxin in studies of signal transduction and G-protein function.

Characterization of a mutant Escherichia coli heat-labile toxin, LT(R192G/L211A), as a safe and effective oral adjuvant.

J Clements,  Lucy Freytag,  Jay B. Norton … (2011)
Despite the fact that the adjuvant properties of the heat-labile enterotoxins of Escherichia coli (LT) and Vibrio cholerae (CT) have been known for more than 20 years, there are no available oral vaccines containing these molecules as adjuvants, primarily because they are both very potent enterotoxins. A number of attempts with various degrees of success have been made to reduce or eliminate the enterotoxicity of LT and CT so they can safely be used as oral adjuvants or immunogens. In this report we characterize the structural, enzymatic, enterotoxic, and adjuvant properties of a novel mutant of LT, designated LT(R192G/L211A), or dmLT. dmLT was not sensitive to trypsin activation, had reduced enzymatic activity for induction of cyclic AMP in Caco-2 cells, and exhibited no enterotoxicity in the patent mouse assay. Importantly, dmLT retained the ability to function as an oral adjuvant for a coadministered antigen (tetanus toxoid) and to elicit anti-LT antibodies. In vitro and in vivo data suggest that the reduced enterotoxicity of this molecule compared to native LT or the single mutant, LT(R192G), is a consequence of increased sensitivity to proteolysis and rapid intracellular degradation in mammalian cells. In conclusion, dmLT is a safe and powerful detoxified enterotoxin with the potential to function as a mucosal adjuvant for coadministered antigens and to elicit anti-LT antibodies without undesirable side effects.