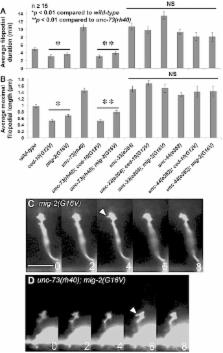 Publisher: The Company of Biologists

Rho GTPases and the control of cell behaviour.

A. Hall (2005)
Rho, Rac and Cdc42, three members of the Rho family of small GTPases, each control a signal transduction pathway linking membrane receptors to the assembly and disassembly of the actin cytoskeleton and of associated integrin adhesion complexes. Rho regulates stress fibre and focal adhesion assembly, Rac regulates the formation of lamellipodia protrusions and membrane ruffles, and Cdc42 triggers filopodial extensions at the cell periphery. These observations have led to the suggestion that wherever filamentous actin is used to drive a cellular process, Rho GTPases are likely to play an important regulatory role. Rho GTPases have also been reported to control other cellular activities, such as the JNK (c-Jun N-terminal kinase) and p38 MAPK (mitogen-activated protein kinase) cascades, an NADPH oxidase enzyme complex, the transcription factors NF-kappaB (nuclear factor kappaB) and SRF (serum-response factor), and progression through G1 of the cell cycle. Thus Rho, Rac and Cdc42 can regulate the actin cytoskeleton and gene transcription to promote co-ordinated changes in cell behaviour. We have been analysing the biochemical contributions of Rho GTPases in cell movement and have found that Rac controls cell protrusion, while Cdc42 controls cell polarity.

Kyonsoo Hong,  Lindsay Hinck,  Makoto Nishiyama … (1999)
Netrins are bifunctional: they attract some axons and repel others. Netrin receptors of the Deleted in Colorectal Cancer (DCC) family are implicated in attraction and those of the UNC5 family in repulsion, but genetic evidence also suggests involvement of the DCC protein UNC-40 in some cases of repulsion. To test whether these proteins form a receptor complex for repulsion, we studied the attractive responses of Xenopus spinal axons to netrin-1, which are mediated by DCC. We show that attraction is converted to repulsion by expression of UNC5 proteins in these cells, that this repulsion requires DCC function, that the UNC5 cytoplasmic domain is sufficient to effect the conversion, and that repulsion can be initiated by netrin-1 binding to either UNC5 or DCC. The isolated cytoplasmic domains of DCC and UNC5 proteins interact directly, but this interaction is repressed in the context of the full-length proteins. We provide evidence that netrin-1 triggers the formation of a receptor complex of DCC and UNC5 proteins and simultaneously derepresses the interaction between their cytoplasmic domains, thereby converting DCC-mediated attraction to UNC5/DCC-mediated repulsion.