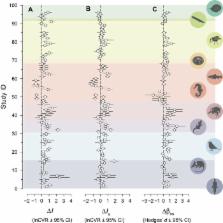 Since Darwin’s conception of sexual selection theory, scientists have struggled to identify the evolutionary forces underlying the pervasive differences between male and female behavior, morphology, and physiology. The Darwin-Bateman paradigm predicts that anisogamy imposes stronger sexual selection on males, which, in turn, drives the evolution of conventional sex roles in terms of female-biased parental care and male-biased sexual dimorphism. Although this paradigm forms the cornerstone of modern sexual selection theory, it still remains untested across the animal tree of life. This lack of evidence has promoted the rise of alternative hypotheses arguing that sex differences are entirely driven by environmental factors or chance. We demonstrate that, across the animal kingdom, sexual selection, as captured by standard Bateman metrics, is indeed stronger in males than in females and that it is evolutionarily tied to sex biases in parental care and sexual dimorphism. Our findings provide the first comprehensive evidence that Darwin’s concept of conventional sex roles is accurate and refute recent criticism of sexual selection theory.

TimeTree: a public knowledge-base of divergence times among organisms.

S Blair Hedges,  Joel T Dudley,  Sudhir Kumar (2006)
Biologists and other scientists routinely need to know times of divergence between species and to construct phylogenies calibrated to time (timetrees). Published studies reporting time estimates from molecular data have been increasing rapidly, but the data have been largely inaccessible to the greater community of scientists because of their complexity. TimeTree brings these data together in a consistent format and uses a hierarchical structure, corresponding to the tree of life, to maximize their utility. Results are presented and summarized, allowing users to quickly determine the range and robustness of time estimates and the degree of consensus from the published literature. TimeTree is available at http://www.timetree.net

The evolution of polyandry: multiple mating and female fitness in insects.

Anna Arnqvist,  Olov Nilsson (2000)
Theory suggests that male fitness generally increases steadily with mating rate, while one or a few matings are sufficient for females to maximize their reproductive success. Contrary to these predictions, however, females of the majority of insects mate multiply. We performed a meta-analysis of 122 experimental studies addressing the direct effects of multiple mating on female fitness in insects. Our results clearly show that females gain directly from multiple matings in terms of increased lifetime offspring production. Despite a negative effect of remating on female longevity in species without nuptial feeding, the positive effects (increased egg production rate and fertility) more than outweigh this negative effect for moderate mating rates. The average direct net fitness gain of multiple mating was as high as 30-70%. Therefore, the evolutionary maintenance of polyandry in insects can be understood solely in terms of direct effects. However, our results also strongly support the existence of an intermediate optimal female mating rate, beyond which a further elevated mating rate is deleterious. The existence of such optima implies that sexual conflict over the mating rate should be very common in insects, and that sexually antagonistic coevolution plays a key role in the evolution of mating systems and of many reproductive traits. We discuss the origin and maintenance of nuptial feeing in the light of our findings, and suggest that elaborate and nutritional ejaculates may be the result of sexually antagonistic coevolution. Future research should aim at gaining a quantitative understanding of the evolution of female mating rates. Copyright 2000 The Association for the Study of Animal Behaviour.

Hanna Rinta-Kokko,  Michael D. Jennions (2008)
Conventional sex roles imply caring females and competitive males. The evolution of sex role divergence is widely attributed to anisogamy initiating a self-reinforcing process. The initial asymmetry in pre-mating parental investment (eggs vs. sperm) is assumed to promote even greater divergence in post-mating parental investment (parental care). But do we really understand the process? Trivers [Sexual Selection and the Descent of Man 1871-1971 (1972), Aldine Press, Chicago] introduced two arguments with a female and male perspective on whether to care for offspring that try to link pre-mating and post-mating investment. Here we review their merits and subsequent theoretical developments. The first argument is that females are more committed than males to providing care because they stand to lose a greater initial investment. This, however, commits the 'Concorde Fallacy' as optimal decisions should depend on future pay-offs not past costs. Although the argument can be rephrased in terms of residual reproductive value when past investment affects future pay-offs, it remains weak. The factors likely to change future pay-offs seem to work against females providing more care than males. The second argument takes the reasonable premise that anisogamy produces a male-biased operational sex ratio (OSR) leading to males competing for mates. Male care is then predicted to be less likely to evolve as it consumes resources that could otherwise be used to increase competitiveness. However, given each offspring has precisely two genetic parents (the Fisher condition), a biased OSR generates frequency-dependent selection, analogous to Fisherian sex ratio selection, that favours increased parental investment by whichever sex faces more intense competition. Sex role divergence is therefore still an evolutionary conundrum. Here we review some possible solutions. Factors that promote conventional sex roles are sexual selection on males (but non-random variance in male mating success must be high to override the Fisher condition), loss of paternity because of female multiple mating or group spawning and patterns of mortality that generate female-biased adult sex ratios (ASR). We present an integrative model that shows how these factors interact to generate sex roles. We emphasize the need to distinguish between the ASR and the operational sex ratio (OSR). If mortality is higher when caring than competing this diminishes the likelihood of sex role divergence because this strongly limits the mating success of the earlier deserting sex. We illustrate this in a model where a change in relative mortality rates while caring and competing generates a shift from a mammalian type breeding system (female-only care, male-biased OSR and female-biased ASR) to an avian type system (biparental care and a male-biased OSR and ASR).