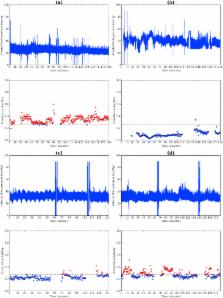 Despite the decline in mortality rates of extremely preterm infants, intraventricular haemorrhage (IVH) remains common in survivors. The need for resuscitation and cardiorespiratory management, particularly within the first 24 hours of life, are important factors in the incidence and timing of IVH. Variability analyses of heart rate and blood pressure data has demonstrated potential approaches to predictive monitoring. In this study, we investigated the early identification of infants at a high risk of developing IVH, using time series analysis of blood pressure and respiratory data. We also explore approaches to improving model performance, such as the inclusion of multiple variables and signal pre-processing to enhance the results from detrended fluctuation analysis. Of the models we evaluated, the highest area under receiver-operator characteristic curve (5th, 95th percentile) achieved was 0.921 (0.82, 1.00) by mean diastolic blood pressure and the long-term scaling exponent of pulse interval (PI α 2), exhibiting a sensitivity of >90% at a specificity of 75%. Following evaluation in a larger population, our approach may be useful in predictive monitoring to identify infants at high risk of developing IVH, offering caregivers more time to adjust intensive care treatment.

Praveen Ballabh (2009)
Intraventricular hemorrhage (IVH) is a major complication of prematurity. IVH typically initiates in the germinal matrix, which is a richly vascularized collection of neuronal-glial precursor cells in the developing brain. The etiology of IVH is multifactorial and is primarily attributed to the intrinsic fragility of the germinal matrix vasculature and the disturbance in the cerebral blood flow (CBF). Although this review broadly describes the pathogenesis of IVH, the main focus is on the recent development in molecular mechanisms that elucidates the fragility of the germinal matrix vasculature. The microvasculature of the germinal matrix is frail because of an abundance of angiogenic blood vessels that exhibit paucity of pericytes, immaturity of basal lamina, and deficiency of glial fibrillary acidic protein (GFAP) in the ensheathing astrocytes endfeet. High VEGF and angiopoietin-2 levels activate a rapid angiogenesis in the germinal matrix. The elevation of these growth factors may be ascribed to a relative hypoxia of the germinal matrix perhaps resulting from high metabolic activity and oxygen consumption of the neural progenitor cells. Hence, the rapid stabilization of the angiogenic vessels and the restoration of normal CBF on the first day of life are potential strategies to prevent IVH in premature infants.

J Volpe,  Steve Perlman,  J. McMENAMIN (1983)
We studied whether changes in cerebral blood-flow velocity occur during the respiratory-distress syndrome and whether, if present, they are related to the subsequent occurrence of intraventricular hemorrhage. Fifty infants weighing less than 1500 g at birth who required mechanical ventilation for the respiratory-distress syndrome were studied from the first hours of life. Blood-flow velocity in the anterior cerebral artery was measured at the anterior fontanel by means of the Doppler technique. At 12 hours of age, the infants had blood-flow velocity patterns that were either stable or fluctuating and that reflected the patterns of simultaneously recorded blood pressure. Intraventricular hemorrhage subsequently developed in 21 of 23 infants with the fluctuating pattern (in most of them, within the next 24 hours), but in only 7 of 27 infants with the stable pattern. Preliminary data suggest that the cerebral hemodynamic fluctuations are related to the respiratory disease and particularly to the mechanics of respiration. We conclude that the fluctuating pattern of cerebral blood-flow velocity in infants with the respiratory-distress syndrome indicates an extreme risk of the development of intraventricular hemorrhage and may represent a major and potentially preventable etiologic factor.