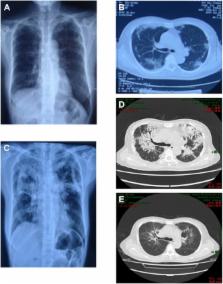 Mesalazine-induced eosinophilic pneumonia has been rarely reported. We reported a case of mesalazine-induced eosinophilic pneumonia in a 56-year-old female who took mesalazine without a prescription for suspected ulcerative colitis. She had an elevated eosinophil count in peripheral blood and bronchoalveolar lavage fluid. Eosinophil infiltration was also noted in bone marrow aspirates. Chest radiograph and computed tomography demonstrated bilateral upper lung predominant infiltrates and spirometry showed a restrictive ventilatory defect with a reduced diffusion capacity. The patient recovered after cessation of mesalazine therapy. Mesalazine-induced lung damage should be considered in patients who develop unexplained respiratory symptoms while taking this agent.

Can a drug-induced pulmonary hypersensitivity reaction be dose-dependent? A case with mesalamine.

M G Cappellato,  S. Stefani,  P Sossai (2001)
Mesalamine-induced pulmonary adverse drug reactions (ADRs) in the course of therapy for inflammatory bowel diseases are rare events, having been reported in only 21 cases. This response, resembling hypersensitivity pneumonitis, is considered to be immunologically mediated and thus dose-independent. We report the case of a 70-year-old woman with ulcerative colitis (UC) who developed biopsy-proven interstitial pulmonary disease (lymphocytic alveolitis and mild interstitial pulmonary fibrosis) three months after starting mesalamine therapy. The usual treatment in cases of ADR is cessation of the drug and initiation of corticosteroids. In this case, we continued the mesalamine therapy but halved the dose, and did not add corticosteroids. This approach led to a remission of the pulmonary manifestations without a resurgence of UC symptoms. Based on a review of the literature and our own observation, we challenge the concept that mesalamine-induced pulmonary injury is always due to a hypersensitivity reaction. The evidence suggests that in some cases pulmonary ADR is dose-related; in such instances the most accepted therapy is not necessarily the most appropriate one.

Jung Kim,  June-Hyuk Lee,  Eun-Suk Koh … (2013)
It has been well known that mesalazine can cause the interstitial lung disease, such as Bronchiolitis obliterans with organizing pneumonia (BOOP), Non-Specific Interstitial Pneumonia (NSIP), or eosinophilic pneumonia. 5-Aminosalicylic acid (5-ASA), mesalazine, and sulfasalazine are important drugs for treating inflammatory bowel disease. Topical products of these limited systemic absorption and have less frequent side effects, therefore suppository form of these drugs have been used more than systemic drug. Most cases of measalzine-induced lung toxicity develop from systemic use of the drug. A 30-year-old woman had an interstitial lung disease after using mesalazine suppository because of ulcerative colitis. The lung biopsy demonstrated eosinophilic pneumonia combined with BOOP. She was recovered after stopping of mesalazine suppository and treatment with systemic steroid.