Mucoactive and antioxidant medicines for COPD: consensus of a group of Chinese pulmonary physicians 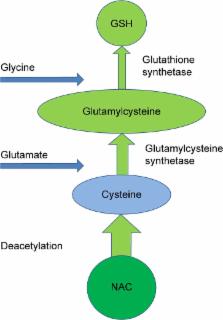 Airway mucus hypersecretion is a frequent symptom associated with acute and chronic airway disease. Inhibition of mucus production or promotion of mucolysis not only relieved symptoms but also improved disease outcomes. There are numerous available mucoactive medicines for prescription, and how to select them properly for different diseases is important for clinical practice. So far, there is no one consensus or guideline reported. A group of Chinese pulmonary physicians worked together to complete this consensus based on literature review, summarized mechanism and usage of each classical mucoactive medicine. In general, antioxidant mucoactive medicines play an important role in chronic airway disease, including but not limited to airway mucus clearance, reduced acute exacerbation and improved pulmonary function.

The chemistry and biological activities of N-acetylcysteine.

Sara Dean,  Sara Goldstein,  Yuval Samuni … (2013)
N-acetylcysteine (NAC) has been in clinical practice for several decades. It has been used as a mucolytic agent and for the treatment of numerous disorders including paracetamol intoxication, doxorubicin cardiotoxicity, ischemia-reperfusion cardiac injury, acute respiratory distress syndrome, bronchitis, chemotherapy-induced toxicity, HIV/AIDS, heavy metal toxicity and psychiatric disorders. The mechanisms underlying the therapeutic and clinical applications of NAC are complex and still unclear. The present review is focused on the chemistry of NAC and its interactions and functions at the organ, tissue and cellular levels in an attempt to bridge the gap between its recognized biological activities and chemistry. The antioxidative activity of NAC as of other thiols can be attributed to its fast reactions with OH, NO2, CO3(-) and thiyl radicals as well as to restitution of impaired targets in vital cellular components. NAC reacts relatively slowly with superoxide, hydrogen-peroxide and peroxynitrite, which cast some doubt on the importance of these reactions under physiological conditions. The uniqueness of NAC is most probably due to efficient reduction of disulfide bonds in proteins thus altering their structures and disrupting their ligand bonding, competition with larger reducing molecules in sterically less accessible spaces, and serving as a precursor of cysteine for GSH synthesis. The outlined reactions only partially explain the diverse biological effects of NAC, and further studies are required for determining its ability to cross the cell membrane and the blood-brain barrier as well as elucidating its reactions with components of cell signaling pathways. Copyright © 2013 Elsevier B.V. All rights reserved.

Thomas Almdal,  Eva Prescott,  Morten Dahl … (2006)
Low body mass index (BMI) is a marker of poor prognosis in chronic obstructive pulmonary disease (COPD). In the general population, the harmful effect of low BMI is due to the deleterious effects of a low fat-free mass index (FFMI; fat-free mass/weight(2)). We explored distribution of low FFMI and its association with prognosis in a population-based cohort of patients with COPD. We used data on 1,898 patients with COPD identified in a population-based epidemiologic study in Copenhagen. FFM was measured using bioelectrical impedance analysis. Patients were followed up for a mean of 7 yr and the association between BMI and FFMI and mortality was examined taking age, sex, smoking, and lung function into account. The mean FFMI was 16.0 kg/m(2) for women and 18.7 kg/m(2) for men. Among subjects with normal BMI, 26.1% had an FFMI lower than the lowest 10th percentile of the general population. BMI and FFMI were significant predictors of mortality, independent of relevant covariates. Being in the lowest 10th percentile of the general population for FFMI was associated with a hazard ratio of 1.5 (95% confidence interval, 1.2-1.8) for overall mortality and 2.4 (1.4-4.0) for COPD-related mortality. FFMI was also a predictor of overall mortality when analyses were restricted to subjects with normal BMI. FFMI provides information in addition to BMI and assessment of FFM should be considered in the routine assessment of COPD.

Exhaled 8-isoprostane as an in vivo biomarker of lung oxidative stress in patients with COPD and healthy smokers.

M. Corradi,  V Collins,  G Ciabattoni … (2000)
Most of the studies linking chronic obstructive pulmonary disease (COPD) with oxidative stress are in vitro, using invasive techniques, or measuring systemic oxidative stress. The aim of this study was to quantify oxidative stress in the lungs in patients with COPD and in healthy smokers, as reflected by 8-isoprostane concentrations in breath condensate. This is a noninvasive method to collect airway secretions. 8-Isoprostane is a prostaglandin-F(2alpha) isomer that is formed in vivo by free radical-catalyzed peroxidation of arachidonic acid. We also studied the acute effect of smoking on exhaled 8-isoprostane in healthy smokers. Exhaled 8-isoprostane was measured by a specific enzyme immunoassay in 10 healthy nonsmokers and 12 smokers, 25 COPD ex-smokers, and 15 COPD current smokers. 8-Isoprostane concentrations were similar in COPD ex-smokers (40 +/- 3.1 pg/ml) and current smokers (45 +/- 3.6 pg/ ml) and were increased about 1.8-fold compared with healthy smokers (24 +/- 2.6 pg/ml, p < 0.001), who had 2.2-fold higher 8-isoprostane than healthy nonsmokers (10.8 +/- 0.8 pg/ml, p < 0.05). Smoking caused an acute increase in exhaled 8-isoprostane by about 50%. Our study shows that free radical production is increased in patients with COPD and that smoking causes an acute increase in oxidative stress.