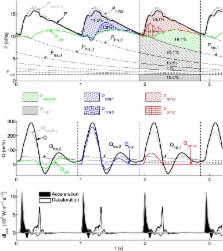 We reviewed existing methods for analyzing, in the time domain, physical mechanisms underlying the patterns of blood pressure and flow waveforms in the arterial system. These are wave intensity analysis and separations into several types of waveforms: (i) forward- and backward-traveling, (ii) peripheral and conduit, or (iii) reservoir and excess. We assessed the physical information provided by each method and showed how to combine existing methods in order to quantify contributions to numerically generated waveforms from previous cardiac cycles and from specific regions and properties of the numerical domain: the aortic root, arterial bifurcations and tapered vessels, peripheral reflection sites, and the Windkessel function of the aorta. We illustrated our results with numerical examples involving generalized arterial stiffening in a distributed one-dimensional model or localized changes in the model parameters due to a femoral stenosis, carotid stent or abdominal aortic aneurysm.

Di Chen,  Philip Wang,  Donald M. O’Rourke … (1983)
Pulse wave velocity (PWV) was measured by means of transcutaneous Doppler techniques in the aorta, right arm, and right leg of 480 normal subjects of both sexes in urban Beijing, China (age range 3 to 89 years, mean age 41 +/- 20.8 SD); supine blood pressure was recorded in the brachial artery of each subject with standard sphygmomanometric procedures. Serum cholesterol was determined in a subgroup of 79 subjects (age 17 to 85 years, mean 47 +/- 26 SD). PWV (y in cm/sec) was found to vary with age (x, years) at each of the three locations according to the following regression equations: aorta, y = 9.2x + 615, r = .673 (p less than .001); right arm, y = 4.8x + 998, r = .453 (p less than .001); right leg, y = 5.6x + 791, r = .630 (p less than .001). Systolic, diastolic, mean, and pulse pressures were found to increase with age. PWV also increased with mean supine blood pressure but was not related to serum cholesterol (average 4.49 +/- 0.11 [SEM], mmol/l). Compared with that of Western populations, serum cholesterol tended to be lower at all age groups, systolic pressure higher at ages over 35 years, and PWV higher at all ages. Because change in PWV is directly related to change in arterial compliance, these results indicate that aging and not concomitant atherosclerosis (known to be rare in Asian populations) is the dominant factor associated with reduced arterial compliance and increased left ventricular load in these subjects.

M S Olufsen,  C. S. Peskin,  W. Y. Kim … (2015)
Blood flow in the large systemic arteries is modeled using one-dimensional equations derived from the axisymmetric Navier-Stokes equations for flow in compliant and tapering vessels. The arterial tree is truncated after the first few generations of large arteries with the remaining small arteries and arterioles providing outflow boundary conditions for the large arteries. By modeling the small arteries and arterioles as a structured tree, a semi-analytical approach based on a linearized version of the governing equations can be used to derive an expression for the root impedance of the structured tree in the frequency domain. In the time domain, this provides the proper outflow boundary condition. The structured tree is a binary asymmetric tree in which the radii of the daughter vessels are scaled linearly with the radius of the parent vessel. Blood flow and pressure in the large vessels are computed as functions of time and axial distance within each of the arteries. Comparison between the simulations and magnetic resonance measurements in the ascending aorta and nine peripheral locations in one individual shows excellent agreement between the two.

Associate Editor Diego Gallo oversaw the review of this article.