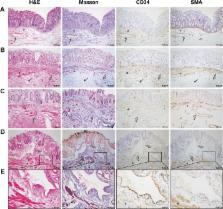 A total of 281 patients with internal hemorrhoids from degree I to IV underwent hemorrhoidectomy. The vascular changes were analyzed by microscopic assessment and software analysis, with Masson’s trichrome, CD34, and smooth muscle actin.

The hemorrhoidal tissues exhibited abnormal vessels in the mucosae and submucosae that we termed them as myofibrotic malformation vessels (MMVs). MMVs are not ascribed to arteries or veins because they exhibit enlarged and tortuous lumens with smooth muscle dysplasia and fibrotic deposition in the walls without overlying mucosal ulceration. The muscularis mucosae also showed smooth muscle dysplasia and fibrosis, even if it were interrupted by the intruding MMVs. The statistical data indicated that the severity of all the changes correlate positively with the progression of hemorrhoids ( P<0.001). Hemorrhoidal patients are prone for reoccurrence even with prolapsing hemorrhoid when compared with the conventional hemorrhoidectomy. Multiple logistic regression analysis showed that MMVs in mucosal propria, mean thickness of mucosal muscularis layer, and fibrotic changes in MMV were independent risk factors for MMVs in hemorrhoidal disease.

MMVs and muscularis mucosae dysplasia reciprocally contribute to hemorrhoidal exacerbation. The novel findings of this study propose that the characteristic features of MMVs and muscularis mucosae dysplasia of the anorectal tube ultimately cause symptomatic hemorrhoids, which could affect the clinical management of hemorrhoidal disease through the use of surgery to target the malformed vessels.

The prevalence of hemorrhoids in adults.

G. Steiner,  Stefan Riss,  Friedrich Weiser … (2012)
Exact data on the prevalence of hemorrhoids are rare. Therefore, we designed a study to investigate the prevalence of hemorrhoids and associated risk factors in an adult general population. Between 2008 and 2009, consecutive patients were included in a prospective study. They attended the Austrian national wide health care program for colorectal cancer screening at four medical institutions. A flexible colonoscopy and detailed examination were conducted in all patients. Hemorrhoids were defined according to a standardized grading system. Independent variables included baseline characteristics, sociodemographic data, and health status. Potential risk factors were calculated by univariate and multivariate analysis. Of 976 participants, 380 patients (38.93%) suffered from hemorrhoids. In 277 patients (72.89%), hemorrhoids were classified as grade I, in 70 patients (18.42%) as grade II, in 31 patients (8.16%) as grade III, and in 2 patients (0.53%) as grade IV. One hundred seventy patients (44.74%) complained about symptoms associated with hemorrhoids, whereas 210 patients (55.26%) reported no symptoms. In the univariate and multivariate analysis, body mass index (BMI) had a significant effect on the occurrence of hemorrhoids with p = 0.0391 and p = 0.0282, respectively. Even when correcting for other potential risk factors, an increase in the BMI of one increased the risk of hemorrhoids by 3.5%. Hemorrhoids occur frequently in the adult general population. Notably, a considerable number of people with hemorrhoids do not complain about symptoms. In addition, a high BMI can be regarded as an independent risk factor for hemorrhoids.

The nature of haemorrhoids.

William Gabrielli,  S. Canuti,  D. Altomare … (2001)
The aim of this study was to compare the results of conventional open haemorrhoidectomy as currently practised in Italy (group 1) with stapled haemorrhoidectomy using a 33-mm circular stapling device (group 2). One hundred patients with symptomatic third- and fourth-degree haemorrhoids were enrolled by five hospitals. Patients were allocated to the two groups according to a centralized randomization scheme featuring five permutated blocks of 20. Preoperative clinical examination and anorectal manometry demonstrated no features of anal incontinence. Patients had a clinical and manometric re-evaluation after operation and were asked to complete a clinical diary. After a median of 16 (range 8-19) months patients were administered a standardized questionnaire by telephone. Postoperative bleeding requiring haemostatic procedures occurred in three patients in each group. Patients in group 1 complained of moderate pain for a median of 5.3 (range 0-19) days compared with 3.1 (range 0-10) days in group 2 (P = 0.01), while severe pain was present for 2.3 (range 0-24) days in group 1 but only for 1 (range 0-14) day in group 2 (P = 0.03). The median hospital stay was 2 days in group 1 compared with 1 day in group 2 (P = 0.01). In the early days after operation, patients in group 2 had greater difficulty in maintaining normal continence to liquid stools (P = 0.01), but after 30 days the continence score was better in group 2 (P = 0.04). Stapled haemorrhoidectomy is as effective as conventional haemorrhoidectomy. Reduced postoperative pain, shorter hospital stay and a trend toward earlier return to work suggest short-term advantages for the stapled technique.