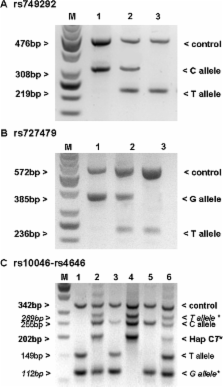 Estrogen synthesis suppression induced by aromatase inhibitors in breast cancer (BC) patients may be affected by single nucleotide polymorphisms (SNPs) of the gene encoding aromatase enzyme, CYP19A1. We assessed the association between plasma estrone sulfate (ES), letrozole treatment, and four SNPs of CYP19A1 gene (rs10046 C>T, rs4646 G>T, rs749292 C>T, rs727479 T>G) which seem to be related to circulating estrogen levels. Patients were enrolled into a prospective, Italian multi-center clinical trial (Gruppo Italiano Mammella, GIM-5) testing the association of CYP19A1 SNPs with the efficacy of letrozole adjuvant therapy, in postmenopausal early BC patients. SNPs were identified from peripheral blood cell DNA. Plasma ES concentrations were evaluated by Radio Immuno Assay. Blood samples were obtained immediately before letrozole therapy ( N = 204), at 6-weeks ( N = 178), 6 ( N = 152) and 12-months ( N = 136) during treatment. Medians (IQR) of ES were 160 pg/mL (85–274) at baseline, 35 pg/mL (12–64) at 6-weeks, 29 pg/mL (17–48) at 6 months and 25 pg/mL (8–46) after 12 months treatment. No statistically significant association was evident between polymorphisms and ES circulating levels during letrozole therapy. Letrozole suppression of the aromatase enzyme function is not affected by polymorphisms of CYP19A1 gene in postmenopausal BC patients.

Santiago Rodríguez-Pérez,  Tom Gaunt,  Ian N M Day (2009)
Mendelian randomization (MR) permits causal inference between exposures and a disease. It can be compared with randomized controlled trials. Whereas in a randomized controlled trial the randomization occurs at entry into the trial, in MR the randomization occurs during gamete formation and conception. Several factors, including time since conception and sampling variation, are relevant to the interpretation of an MR test. Particularly important is consideration of the “missingness” of genotypes that can be originated by chance, genotyping errors, or clinical ascertainment. Testing for Hardy-Weinberg equilibrium (HWE) is a genetic approach that permits evaluation of missingness. In this paper, the authors demonstrate evidence of nonconformity with HWE in real data. They also perform simulations to characterize the sensitivity of HWE tests to missingness. Unresolved missingness could lead to a false rejection of causality in an MR investigation of trait-disease association. These results indicate that large-scale studies, very high quality genotyping data, and detailed knowledge of the life-course genetics of the alleles/genotypes studied will largely mitigate this risk. The authors also present a Web program (http://www.oege.org/software/hwe-mr-calc.shtml) for estimating possible missingness and an approach to evaluating missingness under different genetic models.

Polychemotherapy for early breast cancer: an overview of the randomised trials