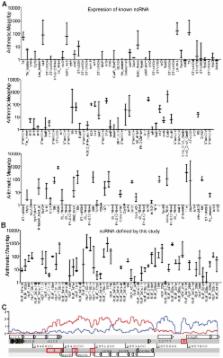 High-density, strand-specific cDNA sequencing (ssRNA–seq) was used to analyze the transcriptome of Salmonella enterica serovar Typhi ( S. Typhi). By mapping sequence data to the entire S. Typhi genome, we analyzed the transcriptome in a strand-specific manner and further defined transcribed regions encoded within prophages, pseudogenes, previously un-annotated, and 3′- or 5′-untranslated regions (UTR). An additional 40 novel candidate non-coding RNAs were identified beyond those previously annotated. Proteomic analysis was combined with transcriptome data to confirm and refine the annotation of a number of hpothetical genes. ssRNA–seq was also combined with microarray and proteome analysis to further define the S. Typhi OmpR regulon and identify novel OmpR regulated transcripts. Thus, ssRNA–seq provides a novel and powerful approach to the characterization of the bacterial transcriptome.

We have applied a novel, strand-specific variation of RNA–seq (ssRNA–seq) to an analysis of the prokaryotic enteric pathogen Salmonella enterica serovar Typhi, the causative agent of Typhoid fever. Strand-specific data facilitated a high-resolution analysis of RNA transcription at a whole genome level with base-pair resolution. Using this technique, we were able to resolve overlapping transcripts of many genes, identify novel small RNAs, improve the accuracy of annotation, verify operon structure, and identify both transcriptionally active and inactive regions. We have compared the ssRNA–seq approach to standard RT–PCR and microarrays, validating the data. ssRNA–seq was used to redefine the OmpR operon that contributes to the pathogenicity of Typhi, identifying several novel OmpR regulated genes and operons. Finally, we have linked the ssRNA–seq data to the proteome and have provided simple open-access informatics tools to simplify interrogation of the data.

The transcriptional landscape of the yeast genome defined by RNA sequencing.

U Nagalakshmi,  Zhong Wang,  K. Waern … (2008)
The identification of untranslated regions, introns, and coding regions within an organism remains challenging. We developed a quantitative sequencing-based method called RNA-Seq for mapping transcribed regions, in which complementary DNA fragments are subjected to high-throughput sequencing and mapped to the genome. We applied RNA-Seq to generate a high-resolution transcriptome map of the yeast genome and demonstrated that most (74.5%) of the nonrepetitive sequence of the yeast genome is transcribed. We confirmed many known and predicted introns and demonstrated that others are not actively used. Alternative initiation codons and upstream open reading frames also were identified for many yeast genes. We also found unexpected 3'-end heterogeneity and the presence of many overlapping genes. These results indicate that the yeast transcriptome is more complex than previously appreciated.

Dynamic repertoire of a eukaryotic transcriptome surveyed at single-nucleotide resolution.

B. Wilhelm,  Valerie Wood,  Jane Rogers … (2008)
Recent data from several organisms indicate that the transcribed portions of genomes are larger and more complex than expected, and that many functional properties of transcripts are based not on coding sequences but on regulatory sequences in untranslated regions or non-coding RNAs. Alternative start and polyadenylation sites and regulation of intron splicing add additional dimensions to the rich transcriptional output. This transcriptional complexity has been sampled mainly using hybridization-based methods under one or few experimental conditions. Here we applied direct high-throughput sequencing of complementary DNAs (RNA-Seq), supplemented with data from high-density tiling arrays, to globally sample transcripts of the fission yeast Schizosaccharomyces pombe, independently from available gene annotations. We interrogated transcriptomes under multiple conditions, including rapid proliferation, meiotic differentiation and environmental stress, as well as in RNA processing mutants to reveal the dynamic plasticity of the transcriptional landscape as a function of environmental, developmental and genetic factors. High-throughput sequencing proved to be a powerful and quantitative method to sample transcriptomes deeply at maximal resolution. In contrast to hybridization, sequencing showed little, if any, background noise and was sensitive enough to detect widespread transcription in >90% of the genome, including traces of RNAs that were not robustly transcribed or rapidly degraded. The combined sequencing and strand-specific array data provide rich condition-specific information on novel, mostly non-coding transcripts, untranslated regions and gene structures, thus improving the existing genome annotation. Sequence reads spanning exon-exon or exon-intron junctions give unique insight into a surprising variability in splicing efficiency across introns, genes and conditions. Splicing efficiency was largely coordinated with transcript levels, and increased transcription led to increased splicing in test genes. Hundreds of introns showed such regulated splicing during cellular proliferation or differentiation.

W. K. Brooks,  K Jagels,  P Connerton … (2001)
Salmonella enterica serovar Typhi (S. typhi) is the aetiological agent of typhoid fever, a serious invasive bacterial disease of humans with an annual global burden of approximately 16 million cases, leading to 600,000 fatalities. Many S. enterica serovars actively invade the mucosal surface of the intestine but are normally contained in healthy individuals by the local immune defence mechanisms. However, S. typhi has evolved the ability to spread to the deeper tissues of humans, including liver, spleen and bone marrow. Here we have sequenced the 4,809,037-base pair (bp) genome of a S. typhi (CT18) that is resistant to multiple drugs, revealing the presence of hundreds of insertions and deletions compared with the Escherichia coli genome, ranging in size from single genes to large islands. Notably, the genome sequence identifies over two hundred pseudogenes, several corresponding to genes that are known to contribute to virulence in Salmonella typhimurium. This genetic degradation may contribute to the human-restricted host range for S. typhi. CT18 harbours a 218,150-bp multiple-drug-resistance incH1 plasmid (pHCM1), and a 106,516-bp cryptic plasmid (pHCM2), which shows recent common ancestry with a virulence plasmid of Yersinia pestis.

Publisher ID: 09-PLGE-RA-0429R2
DOI: 10.1371/journal.pgen.1000569
PMC ID: 2704369
PubMed ID: 19609351
Copyright statement: Perkins et al. This is an open-access article distributed under the terms of the Creative Commons Attribution License, which permits unrestricted use, distribution, and reproduction in any medium, provided the original author and source are credited.