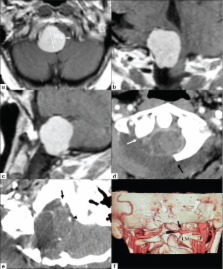 Foramen magnum meningiomas (FMMs) are challenging tumors. We report a classification system based on our experience of 107 tumors.

The three main algorithm criteria included the compartment of development of the tumor, its dural insertion, and its relation to the vertebral artery.

This classification system helps for defining the best surgical approach but also for anticipating the position of the lower cranial nerves and therefore for reducing the surgical morbidity.

William A Rhoton,  David Peace,  T Matsushima … (1982)
Fifty cerebellar hemispheres from 25 adult cadavers were examined. The posterior inferior cerebellar artery (PICA), by definition, arose from the vertebral artery. The vertebral artery was present in 49 and the PICA was present in 42 of the 50 hemispheres. Forty-one of the 42 PICAs arose as a single trunk and 1 arose as a duplicate trunk. The PICA was divided into five segments: the anterior medullary segment lay on the front of the medulla; the lateral medullary segment coursed beside the medulla and extended to the origin of the glossopharyngeal, vagal, and accessory nerves; the tonsillomedullary segment coursed around the caudal half of the cerebellar tonsil; the telovelotonsillar segment coursed in the cleft between the tela choroidea and the inferior medullary velum rostrally and the superior pole of the cerebellar tonsil caudally; and the cortical segment was distributed to the cerebellar surface. Thirty-seven of the 42 PICAs bifurcated into a medial and a lateral trunk. The medial trunk supplied the vermis and the adjacent part of the hemisphere, and the lateral trunk supplied the cortical surface of the tonsil and the hemisphere. The PICA gave off perforating, choroidal, and cortical arteries. The cortical arteries were divided into vermian, tonsillar, and hemispheric groups. Sixteen of the 42 PICAs passed between the rootlets of the accessory nerve, 10 passed between the rootlets of the vagus nerve, 13 passed between the vagus and the accessory nerves, 2 coursed rostral to the glossopharyngeal nerve, and 1 passed between the glossopharyngeal and the vagus nerves.

Benjamin J Levy,  D F Dohn,  Kimberly J. Bay (1982)
The authors present a retrospective analysis of 97 cases of spinal meningioma. Age, sex, tumor location, and clinical presentation are similar to that reported by others. Importantly, even among paraplegic patients, one-third eventually walked. Other findings of note were poor results among those with calcified or recurrent tumors, and a high incidence of invasiveness among the rare epidural lesions. Males do not show the preference for a thoracic location that is found among females, and cervical tumors are almost all anterior to the cord. This last point suggests a different surgical approach in some cases. A large percentage of cases carried other diagnoses before tumor was recognized.

An extreme lateral approach to intradural lesions of the cervical spine and foramen magnum.

L Sekhar,  Ganes C. Sen (1990)
Meningiomas and neurofibromas are the most common intradural extramedullary tumors of the foramen magnum and cervical spine. Many of these tumors are located ventral or ventrolateral to the spinal cord and medulla. Posterior approaches, although adequate for the management of most of these tumors, can sometimes result in incomplete removal of the tumor and exacerbation of the neurological deficits. Although the transoral and transcervical approaches provide a direct route to the tumor, the exposure of the lateral margins in the case of large tumors is inadequate. In addition, because of the removal of vertebral bodies, subsequent fusion may be necessary. In the present report, an extreme lateral approach to the foramen magnum and cervical spine for the removal of intradural tumors is described. The approach provides a lateral exposure of the tumor-cord/stem interface, thus permitting safe dissection without retraction of the cord. The entire longitudinal and lateral extent of the tumor and also its extradural extension can be can be managed by this approach. This approach can be considered in such a group of patients harboring entirely ventral or recurrent tumors for which the conventional posterior approach has failed. Six patients who underwent this procedure are described to illustrate its application.

This is an open-access article distributed under the terms of the Creative Commons Attribution license, which permits unrestricted use, distribution, and reproduction in any medium, provided the original work is properly cited.