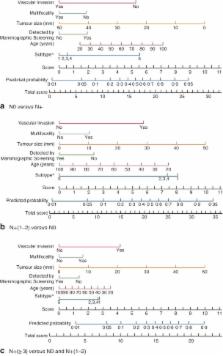 Journal: The British Journal of Surgery

Axillary staging in patients with breast cancer and clinically node‐negative disease is performed by sentinel node biopsy ( SLNB). The aim of this study was to integrate feasible preoperative variables into nomograms to guide clinicians in stratifying treatment options into no axillary staging for patients with non‐metastatic disease ( N0), SLNB for those with one or two metastases, and axillary lymph node dissection ( ALND) for patients with three or more metastases.

Patients presenting to Skåne University Hospital, Lund, with breast cancer were included in a prospectively maintained registry between January 2009 and December 2012. Those with a preoperative diagnosis of nodal metastases were excluded. Patients with data on hormone receptor status, human epidermal growth factor receptor 2 and Ki‐67 expression were included to allow grouping into surrogate molecular subtypes. Based on logistic regression analyses, nomograms summarizing the strength of the associations between the predictors and each nodal status endpoint were developed. Predictive performance was assessed using the area under the receiver operating characteristic ( ROC) curve. Bootstrap resampling was performed for internal validation.

Of the 692 patients eligible for analysis, 248 were diagnosed with node‐positive disease. Molecular subtype, age, mode of detection, tumour size, multifocality and vascular invasion were identified as predictors of any nodal disease. Nomograms that included these predictors demonstrated good predictive abilities, and comparable performances in the internal validation; the area under the ROC curve was 0·74 for N0 versus any lymph node metastasis, 0·70 for one or two involved nodes versus N0, and 0·81 for at least three nodes versus two or fewer metastatic nodes.

The nomograms presented facilitate preoperative decision‐making regarding the extent of axillary surgery.

Personalizing the treatment of women with early breast cancer: highlights of the St Gallen International Expert Consensus on the Primary Therapy of Early Breast Cancer 2013

A Goldhirsch,  E Winer,  A S Coates … (2013)
The 13th St Gallen International Breast Cancer Conference (2013) Expert Panel reviewed and endorsed substantial new evidence on aspects of the local and regional therapies for early breast cancer, supporting less extensive surgery to the axilla and shorter durations of radiation therapy. It refined its earlier approach to the classification and management of luminal disease in the absence of amplification or overexpression of the Human Epidermal growth factor Receptor 2 (HER2) oncogene, while retaining essentially unchanged recommendations for the systemic adjuvant therapy of HER2-positive and ‘triple-negative’ disease. The Panel again accepted that conventional clinico-pathological factors provided a surrogate subtype classification, while noting that in those areas of the world where multi-gene molecular assays are readily available many clinicians prefer to base chemotherapy decisions for patients with luminal disease on these genomic results rather than the surrogate subtype definitions. Several multi-gene molecular assays were recognized as providing accurate and reproducible prognostic information, and in some cases prediction of response to chemotherapy. Cost and availability preclude their application in many environments at the present time. Broad treatment recommendations are presented. Such recommendations do not imply that each Panel member agrees: indeed, among more than 100 questions, only one (trastuzumab duration) commanded 100% agreement. The various recommendations in fact carried differing degrees of support, as reflected in the nuanced wording of the text below and in the votes recorded in supplementary Appendix S1, available at Annals of Oncology online. Detailed decisions on treatment will as always involve clinical consideration of disease extent, host factors, patient preferences and social and economic constraints.

Armando E. Giuliano (2011)
Sentinel lymph node dissection (SLND) accurately identifies nodal metastasis of early breast cancer, but it is not clear whether further nodal dissection affects survival. To determine the effects of complete axillary lymph node dissection (ALND) on survival of patients with sentinel lymph node (SLN) metastasis of breast cancer. The American College of Surgeons Oncology Group Z0011 trial, a phase 3 noninferiority trial conducted at 115 sites and enrolling patients from May 1999 to December 2004. Patients were women with clinical T1-T2 invasive breast cancer, no palpable adenopathy, and 1 to 2 SLNs containing metastases identified by frozen section, touch preparation, or hematoxylin-eosin staining on permanent section. Targeted enrollment was 1900 women with final analysis after 500 deaths, but the trial closed early because mortality rate was lower than expected. All patients underwent lumpectomy and tangential whole-breast irradiation. Those with SLN metastases identified by SLND were randomized to undergo ALND or no further axillary treatment. Those randomized to ALND underwent dissection of 10 or more nodes. Systemic therapy was at the discretion of the treating physician. Overall survival was the primary end point, with a noninferiority margin of a 1-sided hazard ratio of less than 1.3 indicating that SLND alone is noninferior to ALND. Disease-free survival was a secondary end point. Clinical and tumor characteristics were similar between 445 patients randomized to ALND and 446 randomized to SLND alone. However, the median number of nodes removed was 17 with ALND and 2 with SLND alone. At a median follow-up of 6.3 years (last follow-up, March 4, 2010), 5-year overall survival was 91.8% (95% confidence interval [CI], 89.1%-94.5%) with ALND and 92.5% (95% CI, 90.0%-95.1%) with SLND alone; 5-year disease-free survival was 82.2% (95% CI, 78.3%-86.3%) with ALND and 83.9% (95% CI, 80.2%-87.9%) with SLND alone. The hazard ratio for treatment-related overall survival was 0.79 (90% CI, 0.56-1.11) without adjustment and 0.87 (90% CI, 0.62-1.23) after adjusting for age and adjuvant therapy. Among patients with limited SLN metastatic breast cancer treated with breast conservation and systemic therapy, the use of SLND alone compared with ALND did not result in inferior survival. clinicaltrials.gov Identifier: NCT00003855.

A randomized comparison of sentinel-node biopsy with routine axillary dissection in breast cancer.