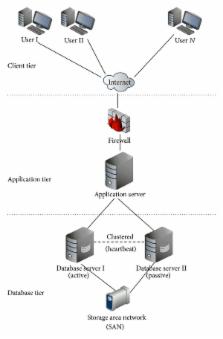 Background. This paper aims to present cancer incidence rates at national and regional level of Egypt, based upon results of National Cancer Registry Program (NCRP). Methods. NCRP stratified Egypt into 3 geographical strata: lower, middle, and upper. One governorate represented each region. Abstractors collected data from medical records of cancer centers, national tertiary care institutions, Health Insurance Organization, Government-Subsidized Treatment Program, and death records. Data entry was online. Incidence rates were calculated at a regional and a national level. Future projection up to 2050 was also calculated. Results. Age-standardized incidence rates per 100,000 were 166.6 (both sexes), 175.9 (males), and 157.0 (females). Commonest sites were liver (23.8%), breast (15.4%), and bladder (6.9%) (both sexes): liver (33.6%) and bladder (10.7%) among men, and breast (32.0%) and liver (13.5%) among women. By 2050, a 3-fold increase in incident cancer relative to 2013 was estimated. Conclusion. These data are the only available cancer rates at national and regional levels of Egypt. The pattern of cancer indicated the increased burden of liver cancer. Breast cancer occupied the second rank. Study of rates of individual sites of cancer might help in giving clues for preventive programs.

Mohamed E Hamid,  G. Thomas Strickland,  Anders Widell … (2007)
Egypt has one of the world's highest prevalences of hepatitis C virus (HCV) infection, with a majority of genotype 4 infections. To explore the genetic diversity of HCV in Egypt, sera from 131 Egyptians [56 from community studies, 37 chronic hepatitis patients, 28 hepatocellular carcinoma (HCC) patients and 10 patients with non-Hodgkin's lymphoma] were genotyped by restriction fragment-length polymorphism and phylogenetic analyses of sequences from the mid-core and non-structural 5B regions. The different genotyping methods showed good agreement. The majority of the viruses (83 of 131; 63%) were of subtype 4a, but five other subtypes within genotype 4 were also observed, as well as three genotype 1b, five genotype 1g and one genotype 3a samples. Interestingly, subtype 4o, which was easily identifiable in all three genomic regions, showed an association with HCC (P=0.017), which merits further investigation.