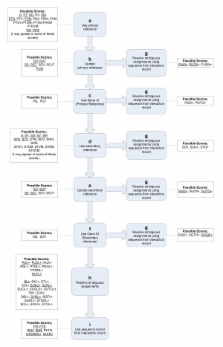 Interaction data for a given protein may be spread across multiple databases. We set out to create a unifying index that would facilitate searching for these data and that would group together redundant interaction data while recording the methods used to perform this grouping.

We present a method to generate a key for a protein interaction record and a key for each participant protein. These keys may be generated by anyone using only the primary sequence of the proteins, their taxonomy identifiers and the Secure Hash Algorithm. Two interaction records will have identical keys if they refer to the same set of identical protein sequences and taxonomy identifiers. We define records with identical keys as a redundant group. Our method required that we map protein database references found in interaction records to current protein sequence records. Operations performed during this mapping are described by a mapping score that may provide valuable feedback to source interaction databases on problematic references that are malformed, deprecated, ambiguous or unfound. Keys for protein participants allow for retrieval of interaction information independent of the protein references used in the original records.

We have applied our method to protein interaction records from BIND, BioGrid, DIP, HPRD, IntAct, MINT, MPact, MPPI and OPHID. The resulting interaction reference index is provided in PSI-MITAB 2.5 format at http://irefindex.uio.no. This index may form the basis of alternative redundant groupings based on gene identifiers or near sequence identity groupings.

Christopher W. V. Hogue,  Doron Betel,  Gary Bader (2003)
The Biomolecular Interaction Network Database (BIND: http://bind.ca) archives biomolecular interaction, complex and pathway information. A web-based system is available to query, view and submit records. BIND continues to grow with the addition of individual submissions as well as interaction data from the PDB and a number of large-scale interaction and complex mapping experiments using yeast two hybrid, mass spectrometry, genetic interactions and phage display. We have developed a new graphical analysis tool that provides users with a view of the domain composition of proteins in interaction and complex records to help relate functional domains to protein interactions. An interaction network clustering tool has also been developed to help focus on regions of interest. Continued input from users has helped further mature the BIND data specification, which now includes the ability to store detailed information about genetic interactions. The BIND data specification is available as ASN.1 and XML DTD.

Development of human protein reference database as an initial platform for approaching systems biology in humans.

Jeffrey A. Joseph,  Suraj Peri,  Uma S. Krishna … (2003)
Human Protein Reference Database (HPRD) is an object database that integrates a wealth of information relevant to the function of human proteins in health and disease. Data pertaining to thousands of protein-protein interactions, posttranslational modifications, enzyme/substrate relationships, disease associations, tissue expression, and subcellular localization were extracted from the literature for a nonredundant set of 2750 human proteins. Almost all the information was obtained manually by biologists who read and interpreted >300,000 published articles during the annotation process. This database, which has an intuitive query interface allowing easy access to all the features of proteins, was built by using open source technologies and will be freely available at http://www.hprd.org to the academic community. This unified bioinformatics platform will be useful in cataloging and mining the large number of proteomic interactions and alterations that will be discovered in the postgenomic era.