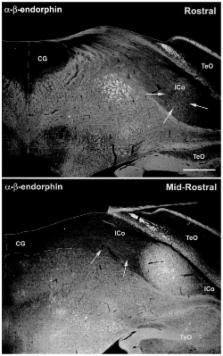 In mammals, rostrocaudal columns of the midbrain periaqueductal gray (PAG) regulate diverse behavioral and physiological functions, including sexual and fight-or-flight behavior, but homologous columns have not been identified in non-mammalian species. In contrast to mammals, in which the PAG lies ventral to the superior colliculus and surrounds the cerebral aqueduct, birds exhibit a hypertrophied tectum that is displaced laterally, and thus the midbrain central gray (CG) extends mediolaterally rather than dorsoventrally as in mammals. We therefore hypothesized that the avian CG is organized much like a folded open PAG. To address this hypothesis, we conducted immunohistochemical comparisons of the midbrains of mice and finches, as well as Fos studies of aggressive dominance, subordinance, non-social defense and sexual behavior in territorial and gregarious finch species. We obtained excellent support for our predictions based on the folded open model of the PAG and further showed that birds possess functional and anatomical zones that form longitudinal columns similar to those in mammals. However, distinguishing characteristics of the dorsal/dorsolateral PAG, such as a dense peptidergic innervation, a longitudinal column of neuronal nitric oxide synthase neurons, and aggression-induced Fos responses, do not lie within the classical avian CG, but in the laterally adjacent intercollicular nucleus (ICo), suggesting that much of the ICo is homologous to the dorsal PAG.

Michael Behbehani (1995)
The major functions of the midbrain periaqueductal gray (PAG), including pain and analgesia, fear and anxiety, vocalization, lordosis and cardiovascular control are considered in this review article. The PAG is an important site in ascending pain transmission. It receives afferents from nociceptive neurons in the spinal cord and sends projections to thalamic nuclei that process nociception. The PAG is also a major component of a descending pain inhibitory system. Activation of this system inhibits nociceptive neurons in the dorsal horn of the sinal cord. The dorsal PAG is a major site for processing of fear and anxiety. It interacts with the amygdala and its lesion alters fear and anxiety produced by stimulation of amygdala. Stimulation of PAG produces vocalization and its lesion produces mutism. The firing of many cells within the PAG correlates with vocalization. The PAG is a major site for lordosis and this role of PAG is mediated by a pathway connecting the medial preoptic with the PAG. The cardiovascular controlling network within the PAG are organized in columns. The dorsal column is involved in pressor and the ventrolateral column mediates depressor responses. The major intrinsic circuit within the PAG is a tonically-active GABAergic network and inhibition of this network is an important mechanism for activation of outputs of the PAG. The various functions of the PAG are interrelated and there is a significant interaction between different functional components of the PAG. Using the current information about the anatomy, physiology, and pharmacology of the PAG, a model is proposed to account for the interactions between these different functional components.

Organization of projections from the ventromedial nucleus of the hypothalamus: a Phaseolus vulgaris-leucoagglutinin study in the rat.

Cristina Swanson,  Richard B. Simerly,  Newton Canteras (1994)
The organization of projections from the four parts of the ventromedial nucleus (VMH) and a ventrolaterally adjacent region tentatively identified as the tuberal nucleus (TU) have been analyzed with small injections of the anterograde axonal tracer Phaseolus vulgaris-leucoagglutinin (PHA-L). Extrinsic and intranuclear projections of each part of the VMH display clear quantitative differences, whereas the overall patterns of outputs are qualitatively similar. Overall, the VMH establishes massive intrahypothalamic terminal fields in other parts of the medial zone, tending to avoid the periventricular and lateral zones. The ventrolateral VMH is more closely related to other parts of the hypothalamus that also express gonadal steroid hormone receptors, including the medial preoptic, tuberal, and ventral premammillary nuclei, whereas other parts of the VMH are more closely related to the anterior hypothalamic and dorsal premammillary nuclei. All parts of the VMH project to the zona incerta (including the A13 region) and parts of the midline thalamus, including the paraventricular and parataenial nuclei and nucleus reuniens. The densest inputs to the septum are to the bed nuclei of the stria terminalis, where the ventrolateral and central VMH innervate the anteroventral and anterodorsal areas and transverse and interfascicular nuclei, whereas the anterior and dorsomedial VMH innervate the latter two. The central, lateral, and medial amygdalar nuclei receive substantial inputs from various parts of the VMH. Other regions of the telencephalon, including the nucleus accumbens and the piriform-amygdaloid, infralimbic, prelimbic, anterior cingulate, agranular insular, piriform, perirhinal, entorhinal, and postpiriform transition areas, also receive sparse inputs. All parts of the VMH send a massive, topographically organized projection to the periaqueductal gray. Other brainstem terminal fields include the superior colliculus, peripeduncular area, locus coeruleus, Barrington's nucleus, parabrachial nucleus, nucleus of the solitary tract, and the mesencephalic, pontine, gigantocellular, paragigantocellular, and parvicellular reticular nuclei. The projections of the TU are similar to, and a subset of, those from the VMH and are thus not nearly as widespread as those from adjacent parts of the lateral hypothalamic area. Because of these similarities, the TU may eventually come to be viewed most appropriately as the lateral component of the VMH itself. The functional implications of the present findings are discussed in view of evidence that the VMH plays a role in the expression of ingestive, affective, and copulatory behaviors.

Publisher ID: PONE-D-11-00431
DOI: 10.1371/journal.pone.0020720
PMC ID: 3110203
PubMed ID: 21694758
Copyright statement: Kingsbury et al. This is an open-access article distributed under the terms of the Creative Commons Attribution License, which permits unrestricted use, distribution, and reproduction in any medium, provided the original author and source are credited.