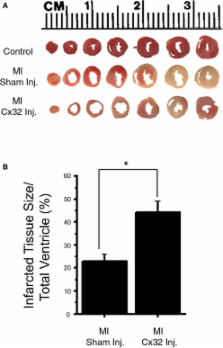 Increasing connexin43 (Cx43) gap junctional conductance as a means to improve cardiac conduction has been proposed as a novel antiarrhythmic modality. Yet, transmission of molecules via gap junctions may be associated with increased infarct size. To determine whether maintaining open gap junction channels impacts on infarct size and induction of ventricular tachycardia (VT) following coronary occlusion, we expressed the pH- and voltage-independent connexin isoform connexin32 (Cx32) in ventricle and confirmed Cx32 expression. Wild-type (WT) mice injected with adenovirus-Cx32 (Cx32inj) were examined following coronary occlusion to determine infarct size and inducibility of VT. There was an increased infarct size in Cx32inj hearts as compared to WT (WT 22.9 ± 4%; Cx32inj 44.3 ± 5%; p < 0.05). Programmed electrical stimulation showed no difference in VT inducibility in WT and Cx32inj mice (VT was reproducibly inducible in 55% of shams and 50% of Cx32inj mice ( p > 0.05). Following coronary occlusion, improving cell–cell communication increased infarct size, and conferred no antiarrhythmic benefit.

Myocardial ischemia/reperfusion-injury, a clinical view on a complex pathophysiological process.

M A Claeys,  L Moens,  Martijn Timmermans … (2005)
Myocardial infarction is the major cause of death in the world. Over the last two decades, coronary reperfusion therapy has become established for the management of acute myocardial infarction (AMI). However, restoration of blood flow to previously ischemic myocardium results in the so-called ischemia/reperfusion (IR)-injury. The different clinical manifestations of this injury include myocardial necrosis, arrhythmia, myocardial stunning and endothelial- and microvascular dysfunction including the no-reflow phenomenon. The pathogenesis of ischemia/reperfusion injury consists of many mechanisms. Recently, there's increasing evidence for an important role in IR-injury on hypercontracture induced by high levels of cytosolic calcium or by low concentrations of ATP. In the last years, many studies on experimental models were investigated, but the clinical trials confirming these effects remain spare. Recently, the beneficial effect of Na(+)/H(+)-exchange inhibitor cariporide and of the oxygen-derived free radical (ODFR) scavenger vitamin E on coronary bypass surgery-induced IR-injury were demonstrated. Also recently, the beneficial effect of allopurinol on the recovery of left ventricular function after rescue balloon-dilatation was demonstrated. The beneficial effect of magnesium and trimetazidine on IR-injury remains controversial. The beneficial effect of adenosine remains to be further confirmed. There's also increasing interest in agentia combining the property of upregulating NO-synthase (e.g. L-arginine) and restoring the balance between NO and free radicals (e.g. tetrahydrobiopterin). One of such agents could be folic acid. In this review article the authors give an overview of the recent insights concerning pathogenesis and therapeutic possibilities to prevent IR-induced injury.

Alexander Sosunov,  Nazira Ozgen,  Penelope Boyden … (2007)
Atrial fibrillation is often initiated by bursts of ectopic activity arising in the pulmonary veins. We have previously shown that a 3-h intermittent burst pacing protocol (BPP), mimicking ectopic pulmonary vein foci, shortens action potential duration (APD) locally at the pulmonary vein-atrial interface (PV) while having no effect elsewhere in rabbit atrium. This shortening is Ca(2+) dependent and is prevented by apamin, which blocks small conductance Ca(2+)-activated K(+) channels (SK(Ca)). The present study investigates the ionic and molecular mechanisms whereby two apamin-sensitive SK(Ca) channels, SK2 and SK3, might contribute to the regional APD changes. Microelectrode and patch clamp techniques were used to record APDs and apamin-sensitive currents in isolated rabbit left atria and cells dispersed from PV and Bachmann's bundle (BB) regions. SK2 and SK3 mRNA and protein levels were quantified, and immunofluorescence was used to observe channel protein distribution. There was a direct relationship between APD shortening and apamin-sensitive current in burst-paced but not sham-paced PV. Moreover, apamin-sensitive current density increased in PV but not BB after BPP. SK2 mRNA, protein, and current were increased in PV after BPP, while SK2 immunostaining shifted from a perinuclear pattern in sham atria to predominance at sites near or at the PV membrane. BPP-induced acceleration of repolarization in PV results from SK2 channel trafficking to the membrane, leading to increased apamin-sensitive outward current. This is the first indication of involvement of Ca(2+)-activated K(+) currents in atrial remodeling and provides a possible basis for evolution of an arrhythmogenic substrate.

This article was submitted to Frontiers in Cardiac Electrophysiology, a specialty of Frontiers in Physiology.

Prestia, Sosunov, Anyukhovsky, Dolmatova, Kelly, Brink, Robinson, Rosen and Duffy. This is an open-access article subject to an exclusive license agreement between the authors and Frontiers Media SA, which permits unrestricted use, distribution, and reproduction in any medium, provided the original authors and source are credited.