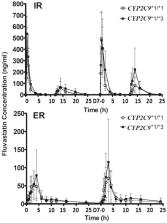 The purpose of the present study was to investigate the impact of genetic polymorphism on fluvastatin pharmacokinetics. In addition, we compared the fluvastatin pharmacokinetics differences between extended-release (ER) 80 mg tablet and immediate-release (IR) 40 mg capsule in terms of drug metabolism enzyme and transporter genetic polymorphisms. In this open-label, randomized, two-period, two-treatment, crossover study ( n = 24), effects of ABCG2, SLCO1B1, ABCB1, CYP2C9 and CYP3A5 polymorphisms on the pharmacokinetics of fluvastatin were analyzed. The administration dosage for IR 40 mg and ER 80 mg were twice and once daily, respectively, for total 7 d. Blood samples for pharmacokinetic evaluation were taken on the 1st and 7th d. The lower exposure following ER was observed. For ER tablets, SLCO1B1 T521C genotype correlated with AUC 0-24 of repeat doses ( P = 0.010). SLCO1B1 T521C genotype had no statistically significant effect on AUC 0-24 of IR capsule of fluvastatin after single or repeated doses. In vitro study demonstrated that when the concentration of fluvastatin was low (< 1 µmol/l), the uptake of fluvastatin in the HEK293-OATP1B1 with SLCO1B1 521TT ( K m =0.18 µmol/l) was faster than that with SLCO1B1 521CC ( K m =0.49 µmol/l), On the other hand, when concentration reached to higher level (> 1 µmol/l), transport velocity of fluvastatin by HEK293-OATP1B1 with SLCO1B1 521TT ( K m  = 11.4 µmol/l) and with SLCO1B1 521TCC ( K m =15.1 µmol/l) tend to be the same. It suggests that the increased effect of SLCO1B1 T521C genotype on ER formulation of fluvastatin was mainly caused by lower blood concentrations. We recommend that formulation should be incorporated into future pharmacogenomics studies.

SLCO1B1 polymorphism and sex affect the pharmacokinetics of pravastatin but not fluvastatin.

An association study of 43 SNPs in 16 candidate genes with atorvastatin response.

M Lira,  William Sasiela,  D Lloyd … (2005)
Variation in individual response to statin therapy has been widely studied for a potential genetic component. Multiple genes have been identified as potential modulators of statin response, but few study findings have replicated. To further examine these associations, 2735 individuals on statin therapy, half on atorvastatin and the other half divided among fluvastatin, lovastatin, pravastatin and simvastatin were genotyped for 43 SNPs in 16 genes that have been implicated in statin response. Associations with low-density lipoprotein cholesterol (LDL-C) lowering, total cholesterol lowering, HDL-C elevation and triglyceride lowering were examined. The only significant associations with LDL-C lowering were found with apoE2 in which carriers of the rare allele who took atorvastatin lowered their LDL-C by 3.5% more than those homozygous for the common allele and with rs2032582 (S893A in ABCB1) in which the two groups of homozygotes differed by 3% in LDL-C lowering. These genetic effects were smaller than those observed with the demographic variables of age and gender. The magnitude of all the differences found is sufficiently small that genetic data from these genes should not influence clinical decisions on statin administration.