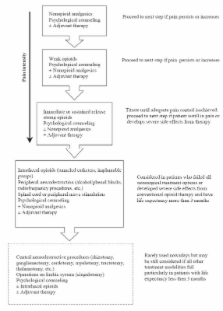 Despite tremendous progress in medicine during last couple of decades, cancer still remains the most horrifying diagnosis for anybody due to its almost inevitable futility. According to American Cancer Society Statistics, it is estimated that only in the United States more than half a million people will die from cancer in 2006. For those who survive, probably the most fearsome symptom regardless of cancer type will be the pain. Although most pain specialists and oncologists worldwide are well aware of the importance to adequately treat the pain, it was yet established that more than half of cancer patients have insufficient pain control, and about quarter of them actually die in pain. Therefore, in this review article we attempted to provide the comprehensive information about different options available nowadays for treating cancer pain focusing on most widely used pharmacologic agents, surgical modalities for intractable pain control, their potential for adverse effects, and ways to increase the effectiveness of treatment maximally optimizing analgesic regimen and improving compliance.

Ahmedin Jemal,  Ram C Tiwari,  Taylor Murray … (2015)
Each year, the American Cancer Society estimates the number of new cancer cases and deaths expected in the United States in the current year and compiles the most recent data on cancer incidence, mortality, and survival rates based on incidence data from the National Cancer Institute and mortality data from the National Center for Health Statistics. Incidence and mortality rates are age standardized to the 2000 US standard million population. A total of 1,368,030 new cancer cases and 563,700 deaths are expected in the United States in 2004. Incidence rates stabilized among men from 1995 through 2000 but continued to increase among females by 0.4% per year from 1987 through 2000. Mortality rates have decreased by 1.5% per year since 1992 among men, but have stabilized from 1998 through 2000 among women. Cancer death rates continued to decrease from the three major cancer sites in men (lung and bronchus, colon and rectum, and prostate) and from female breast and colorectal cancers in women. In analyses by race and ethnicity, African-American men and women have 40% and 20% higher death rates from all cancers combined compared with White men and women, respectively. Cancer incidence and mortality rates are lower in other racial and ethnic groups than in Whites and African Americans for all sites combined and for the four major cancer sites. However, these groups generally have higher rates for stomach, liver, and cervical cancers than do Whites. Furthermore, minority populations are more likely to be diagnosed with advanced stage disease than are Whites. Progress in reducing the burden from cancer can be accelerated by applying existing cancer control knowledge into practice among all segments of the population.

Adrian Allen,  M. Bushnell,  Christoph Stein … (2003)
Chronic neuropathic pain, caused by lesions in the peripheral or central nervous system, comes in many forms. We describe current approaches to the diagnosis and assessment of neuropathic pain and discuss the results of recent research on its pathophysiologic mechanisms. Randomized controlled clinical trials of gabapentin, the 5% lidocaine patch, opioid analgesics, tramadol hydrochloride, and tricyclic antidepressants provide an evidence-based approach to the treatment of neuropathic pain, and specific recommendations are presented for use of these medications. Continued progress in basic and clinical research on the pathophysiologic mechanisms of neuropathic pain may make it possible to predict effective treatments for individual patients by application of a pain mechanism-based approach.