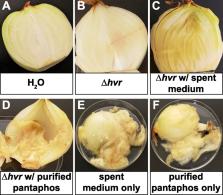 Pantoea ananatis is a significant plant pathogen that targets a number of important crops, a problem that is compounded by the absence of effective treatments to prevent its spread. Our identification of pantaphos as the key virulence factor in onion center rot suggests a variety of approaches that could be employed to address this significant plant disease.

Pantoea ananatis is the primary cause of onion center rot. Genetic data suggest that a phosphonic acid natural product is required for pathogenesis; however, the nature of the molecule is unknown. Here, we show that P. ananatis produces at least three phosphonates, two of which were purified and structurally characterized. The first, designated pantaphos, was shown to be 2-(hydroxy[phosphono]methyl)maleate; the second, a probable biosynthetic precursor, was shown to be 2-(phosphonomethyl)maleate. Purified pantaphos is both necessary and sufficient for the hallmark lesions of onion center rot. Moreover, when tested against mustard seedlings, the phytotoxic activity of pantaphos was comparable to the widely used herbicides glyphosate and phosphinothricin. Pantaphos was also active against a variety of human cell lines but was significantly more toxic to glioblastoma cells. Pantaphos showed little activity when tested against a variety of bacteria and fungi.

SPAdes: a new genome assembly algorithm and its applications to single-cell sequencing.

Anton Bankevich, Sergey Nurk, Dmitry Antipov … (2012)
The lion's share of bacteria in various environments cannot be cloned in the laboratory and thus cannot be sequenced using existing technologies. A major goal of single-cell genomics is to complement gene-centric metagenomic data with whole-genome assemblies of uncultivated organisms. Assembly of single-cell data is challenging because of highly non-uniform read coverage as well as elevated levels of sequencing errors and chimeric reads. We describe SPAdes, a new assembler for both single-cell and standard (multicell) assembly, and demonstrate that it improves on the recently released E+V-SC assembler (specialized for single-cell data) and on popular assemblers Velvet and SoapDeNovo (for multicell data). SPAdes generates single-cell assemblies, providing information about genomes of uncultivatable bacteria that vastly exceeds what may be obtained via traditional metagenomics studies. SPAdes is available online ( http://bioinf.spbau.ru/spades ). It is distributed as open source software.

RASTtk: A modular and extensible implementation of the RAST algorithm for building custom annotation pipelines and annotating batches of genomes

Thomas Brettin, James Davis, Terry Disz … (2015)
The RAST (Rapid Annotation using Subsystem Technology) annotation engine was built in 2008 to annotate bacterial and archaeal genomes. It works by offering a standard software pipeline for identifying genomic features (i.e., protein-encoding genes and RNA) and annotating their functions. Recently, in order to make RAST a more useful research tool and to keep pace with advancements in bioinformatics, it has become desirable to build a version of RAST that is both customizable and extensible. In this paper, we describe the RAST tool kit (RASTtk), a modular version of RAST that enables researchers to build custom annotation pipelines. RASTtk offers a choice of software for identifying and annotating genomic features as well as the ability to add custom features to an annotation job. RASTtk also accommodates the batch submission of genomes and the ability to customize annotation protocols for batch submissions. This is the first major software restructuring of RAST since its inception.