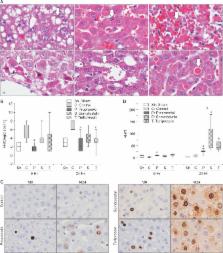 Posthepatectomy liver failure is a serious complication and considered to be caused by increased portal pressure and flow. Splanchnic vasoactive agents and propranolol are known to decrease portal pressure. The aim of this study was to identify optimal candidates with potential for clinical use among somatostatin, terlipressin, and propranolol using rats with 90% hepatectomy.

Terlipressin is considered as the best candidate, while somatostatin has good potential for clinical use, considering their effects on portal pressure and subsequent decrease in liver injury and increase in liver regeneration.

Marie C. DeFrances,  G Michalopoulos (1997)
Liver regeneration after the loss of hepatic tissue is a fundamental parameter of liver response to injury. Recognized as a phenomenon from mythological times, it is now defined as an orchestrated response induced by specific external stimuli and involving sequential changes in gene expression, growth factor production, and morphologic structure. Many growth factors and cytokines, most notably hepatocyte growth factor, epidermal growth factor, transforming growth factor-alpha, interleukin-6, tumor necrosis factor-alpha, insulin, and norepinephrine, appear to play important roles in this process. This review attempts to integrate the findings of the last three decades and looks toward clues as to the nature of the causes that trigger this fascinating organ and cellular response.

F Regenstein,  Peter Teuber,   … (2008)
Hepatorenal syndrome (HRS) type 1 is a progressive functional renal failure in subjects with advanced liver disease. The aim of this study was to evaluate the efficacy and safety of terlipressin, a systemic arterial vasoconstrictor, for cirrhosis type 1 HRS. A prospective, randomized, double-blind, placebo-controlled clinical trial of terlipressin was performed. Subjects with type 1 HRS were randomized to terlipressin (1 mg intravenously every 6 hours) or placebo plus albumin in both groups. The dose was doubled on day 4 if the serum creatinine (SCr) level did not decrease by 30% of baseline. Treatment was continued to day 14 unless treatment success, death, dialysis, or transplantation occurred. Treatment success was defined by a decrease in SCr level to

Role of platelets on liver regeneration after 90% hepatectomy in mice.

Annals of Surgical Treatment and Research is an Open Access Journal. All articles are distributed under the terms of the Creative Commons Attribution Non-Commercial License ( http://creativecommons.org/licenses/by-nc/4.0/) which permits unrestricted non-commercial use, distribution, and reproduction in any medium, provided the original work is properly cited.