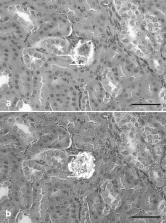 We report a possible spontaneous case of oxalate nephrosis in an African fruit bat ( Epomops franqueti), incidentally observed in Ibadan, South-West Nigeria, in an anatomical and serological survey of the species. Wild caught bats underwent sedation, intracardial perfusion, necropsy and histopathology. All 15 wild-caught African fruit bats were apparently healthy. However, light microscopy revealed mild oligofocal tubulonephrosis with intraluminal deposition of polarizing crystals interpreted as subclinical oxalate nephrosis in one case. In summary, we suggest a dietary aetiology, based on seasonal availability of high ascorbic acid or oxalate containing fruits. However, exposure to anthropogenic contaminants cannot be completely ruled out.

Outbreaks of renal failure associated with melamine and cyanuric acid in dogs and cats in 2004 and 2007.

Chase Ellis,  Karen A. Brown,  Birgit Puschner … (2007)
Sixteen animals affected in 2 outbreaks of pet food-associated renal failure (2 dogs in 2004; 10 cats and 4 dogs in 2007) were evaluated for histopathologic, toxicologic, and clinicopathologic changes. All 16 animals had clinical and laboratory evidence of uremia, including anorexia, vomiting, lethargy, polyuria, azotemia, and hyperphosphatemia. Where measured, serum hepatic enzyme concentrations were normal in animals from both outbreaks. All animals died or were euthanized because of severe uremia. Distal tubular lesions were present in all 16 animals, and unique polarizable crystals with striations were present in distal tubules or collecting ducts in all animals. The proximal tubules were largely unaffected. Crystals and histologic appearance were identical in both outbreaks. A chronic pattern of histologic change, characterized by interstitial fibrosis and inflammation, was observed in some affected animals. Melamine and cyanuric acid were present in renal tissue from both outbreaks. These results indicate that the pet food-associated renal failure outbreaks in 2004 and 2007 share identical clinical, histologic, and toxicologic findings, providing compelling evidence that they share the same causation.

M Williamson,  P T Hooper,  P W Selleck … (2015)
Antibodies to Hendra virus (HeV) have been found in a high percentage of fruit bats (Pteropus spp.) in Australia, indicating a possible reservoir for the virus. The aim of the experiments reported here was to investigate transplacental infection as a possible mode of transmission of the virus in fruit bats and other animals. In a first experiment, 18 pregnant guinea-pigs in the mid-stage of gestation were inoculated with HeV, as an experimental model in a conventional laboratory animal. Nine developed HeV disease as confirmed by viral isolation, histopathology and immunohistochemistry. In five of the nine clinically affected guinea-pigs there was necrosis and strong positive immunostaining in the placentas in an indirect immunoperoxidase (IPX) test for HeV antigen. One of these five guinea-pigs aborted and HeV was isolated from its three fetuses, one of which was also positive to the IPX test. In three other sick guinea-pig dams, virus was isolated from fetuses, and there was positive immunostaining in two of the latter. In a second experiment, four fruit bats were inoculated with a similar dose of HeV. (A further four guinea-pigs inoculated at the same time developed severe disease, indicating adequate virulence.) Two bats were killed at 10 days post-inoculation and two were killed at 21 days. In these bats, no overt clinical disease was observed, but subclinical disease occurred, as indicated by viral isolation, seroconversion, vascular lesions and positive immunostaining. Transplacental transmission was indicated by positive immunostaining in two placentas and confirmed by isolation of virus from one of the associated fetuses.