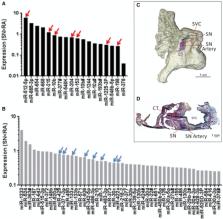 The sinus node (SN) is the primary pacemaker of the heart. SN myocytes possess distinctive action potential morphology with spontaneous diastolic depolarization because of a unique expression of ion channels and Ca 2+‐handling proteins. MicroRNAs (miRs) inhibit gene expression. The role of miRs in controlling the expression of genes responsible for human SN pacemaking and conduction has not been explored. The aim of this study was to determine miR expression profile of the human SN as compared with that of non‐pacemaker atrial muscle.

The human SN possesses a unique pattern of expression of miRs predicted to target functionally important genes. miR‐486‐3p has an important role in SN pacemaker activity by targeting HCN4, making it a potential target for therapeutic treatment of SN disease such as sinus tachycardia.

Mechanisms of post-transcriptional regulation by microRNAs: are the answers in sight?

Nahum Sonenberg,  Suvendra Bhattacharyya,  Witold Filipowicz (2008)
MicroRNAs constitute a large family of small, approximately 21-nucleotide-long, non-coding RNAs that have emerged as key post-transcriptional regulators of gene expression in metazoans and plants. In mammals, microRNAs are predicted to control the activity of approximately 30% of all protein-coding genes, and have been shown to participate in the regulation of almost every cellular process investigated so far. By base pairing to mRNAs, microRNAs mediate translational repression or mRNA degradation. This Review summarizes the current understanding of the mechanistic aspects of microRNA-induced repression of translation and discusses some of the controversies regarding different modes of microRNA function.

MicroRNAs in cardiovascular disease: an introduction for clinicians

Simon P R Romaine,  Maciej Tomaszewski,  Gianluigi Condorelli … (2015)
MicroRNAs (miRNAs) are small, non-coding, RNA molecules approximately 22 nucleotides in length which act as post-transcriptional regulators of gene expression. Individual miRNAs have been shown to regulate the expression of multiple genes. Conversely, the expression of individual genes can be regulated by multiple miRNAs. Consequently, since their discovery just over 20 years ago, miRNAs have been identified as key regulators of complex biological processes linked to multiple cardiovascular pathologies, including left ventricular hypertrophy, ischaemic heart disease, heart failure, hypertension and arrhythmias. Furthermore, since the finding that miRNAs are present in the circulation, they have been investigated as novel biomarkers, especially in the context of acute myocardial infarction (AMI) and heart failure. While there is little convincing evidence that miRNAs can outperform traditional biomarkers, such as cardiac troponins, in the diagnosis of AMI, there is potential for miRNAs to complement existing risk prediction models and act as valuable markers of post-AMI prognosis. Encouragingly, the concept of miRNA-based therapeutics is developing, with synthetic antagonists of miRNAs (antagomiRs) currently in phase II trials for the treatment of chronic hepatitis C virus infection. In the cardiovascular field, promising preclinical studies suggest that they could be useful in treating disorders ranging from heart failure to dyslipidaemia, although several challenges related to specificity and targeted delivery remain to be overcome. Through this review, we provide clinicians with a brief overview of the ever-expanding world of miRNAs.