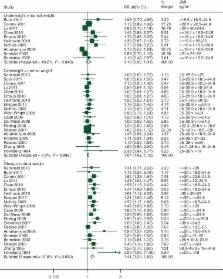 The current systematic literature review and meta-analysis extends and confirms the associations of obesity with an unfavourable overall and breast cancer survival in pre and postmenopausal breast cancer, regardless of when BMI is ascertained. Increased risks of mortality in underweight and overweight women and J-shape associations with total mortality were also observed. The recommendation of maintaining a healthy body weight throughout life is important as obesity is a pandemic health concern.

Positive association between obesity and survival after breast cancer was demonstrated in previous meta-analyses of published data, but only the results for the comparison of obese versus non-obese was summarised.

We systematically searched in MEDLINE and EMBASE for follow-up studies of breast cancer survivors with body mass index (BMI) before and after diagnosis, and total and cause-specific mortality until June 2013, as part of the World Cancer Research Fund Continuous Update Project. Random-effects meta-analyses were conducted to explore the magnitude and the shape of the associations.

Obesity is associated with poorer overall and breast cancer survival in pre- and post-menopausal breast cancer, regardless of when BMI is ascertained. Being overweight is also related to a higher risk of mortality. Randomised clinical trials are needed to test interventions for weight loss and maintenance on survival in women with breast cancer.

Food, Nutrition, Physical Activity, and the Prevention of Cancer: a Global Perspective,

Facilitating meta-analyses by deriving relative effect and precision estimates for alternative comparisons from a set of estimates presented by exposure level or disease category.

Peter Lee,  Jan Hamling,  Patrice Ambühl … (2008)
Epidemiological studies relating a particular exposure to a specified disease may present their results in a variety of ways. Often, results are presented as estimated odds ratios (or relative risks) and confidence intervals (CIs) for a number of categories of exposure, for example, by duration or level of exposure, compared with a single reference category, often the unexposed. For systematic literature review, and particularly meta-analysis, estimates for an alternative comparison of the categories, such as any exposure versus none, may be required. Obtaining these alternative comparisons is not straightforward, as the initial set of estimates is correlated. This paper describes a method for estimating these alternative comparisons based on the ideas originally put forward by Greenland and Longnecker, and provides implementations of the method, developed using Microsoft Excel and SAS. Examples of the method based on studies of smoking and cancer are given. The method also deals with results given by categories of disease (such as histological types of a cancer). The method allows the use of a more consistent comparison when summarizing published evidence, thus potentially improving the reliability of a meta-analysis. Copyright (c) 2007 John Wiley & Sons, Ltd.

P Goodwin,  Kathleen Pritchard,  R Hartwick … (2002)
Insulin, a member of a family of growth factors that includes insulin-like growth factor (IGF)-I and IGF-II, exerts mitogenic effects on normal and malignant breast epithelial cells, acting via insulin and IGF-I receptors. Because of this and because of its recognized association with obesity, an adverse prognostic factor in breast cancer, we examined the prognostic associations of insulin in early-stage breast cancer. A cohort of 512 women without known diabetes, who had early-stage (T1 to T3, N0 to N1, and M0) breast cancer, was assembled and observed prospectively. Information on traditional prognostic factors and body size was collected, and fasting blood was obtained. Fasting insulin was associated with distant recurrence and death; the hazard ratios and 95% confidence intervals (CI) for those in the highest (> 51.9 pmol/L) versus the lowest (< 27.0 pmol/L) insulin quartile were 2.0 (95% CI, 1.2 to 3.3) and 3.1 (95% CI, 1.7 to 5.7), respectively. There was some evidence to suggest that the association of insulin with breast cancer outcomes may be nonlinear. Insulin was correlated with body mass index (Spearman r = 0.59, P <.001), which, in turn, was associated with distant recurrence and death (P <.001). In multivariate analyses that included fasting insulin and available tumor- and treatment-related variables, adjusted hazard ratios for the upper versus lower insulin quartile were 2.1 (95% CI, 1.2 to 3.6) and 3.3 (95% CI, 1.5 to 7.0) for distant recurrence and death, respectively. Fasting insulin level is associated with outcome in women with early breast cancer. High levels of fasting insulin identify women with poor outcomes in whom more effective treatment strategies should be explored.