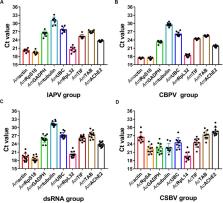 Honey bee viruses are one of the most important pathogens that have contributed to the decrease in honey bee colony health. To analyze the infection dynamics of honey bee viruses, quantification of viral gene expression by RT-qPCR is necessary. However, suitable reference genes have not been reported from viral and RNAi studies of honey bee. Here, we evaluated the expression of 11 common reference genes ( ache2, rps18, β -actin, tbp, tif, rpl32, gadph, ubc, α -tubulin, rpl14, and rpsa) from Apis mellifera (Am) and Apis cerana (Ac) under Israeli acute paralysis virus (IAPV), chronic bee paralysis virus (CBPV), and Chinese sacbrood virus (CSBV) infection as well as dsRNA-PGRP-SA treatment, and we confirmed their validation by evaluating the levels of the defensin 1 and prophenoloxidase ( ppo) genes during viral infection. Our results showed that the expression of selected genes varied under different viral infections. ache2, rps18, β -actin, tbp, and tif can be used to normalize expression levels in Apis mellifera under IAPV infection, while the combination of actin and tif is suitable for CBPV-infected experiments. The combination of rpl14, tif, rpsa, ubc, and ache2 as well as more reference genes is suitable for CSBV treatment in Apis cerana. Rpl14, tif, rps18, ubc, and α -tubulin were the most stable reference genes under dsRNA treatment in Apis mellifera. Furthermore, the geNorm and NormFinder algorithms showed that tif was the best suitable reference gene for these four treatments. This study screened and validated suitable reference genes for the quantification of viral levels in honey bee, as well as for RNAi experiments.

Nicholas Silver, Steve Best, Jie Jiang … (2006)
Background Control genes, which are often referred to as housekeeping genes, are frequently used to normalise mRNA levels between different samples. However, the expression level of these genes may vary among tissues or cells and may change under certain circumstances. Thus, the selection of housekeeping genes is critical for gene expression studies. To address this issue, 7 candidate housekeeping genes including several commonly used ones were investigated in isolated human reticulocytes. For this, a simple ΔCt approach was employed by comparing relative expression of 'pairs of genes' within each sample. On this basis, stability of the candidate housekeeping genes was ranked according to repeatability of the gene expression differences among 31 samples. Results Initial screening of the expression pattern demonstrated that 1 of the 7 genes was expressed at very low levels in reticulocytes and was excluded from further analysis. The range of expression stability of the other 6 genes was (from most stable to least stable): GAPDH (glyceraldehyde 3-phosphate dehydrogenase), SDHA (succinate dehydrogenase), HPRT1 (hypoxanthine phosphoribosyl transferase 1), HBS1L (HBS1-like protein) and AHSP (alpha haemoglobin stabilising protein), followed by B2M (beta-2-microglobulin). Conclusion Using this simple approach, GAPDH was found to be the most suitable housekeeping gene for expression studies in reticulocytes while the commonly used B2M should be avoided.

Elke Genersch, Michel Aubert (2010)
Until the late 1980s, specific viral infections of the honey bee were generally considered harmless in all countries. Then, with the worldwide introduction of the ectoparasite mite Varroa destructor, beekeepers encountered increasing difficulties in maintaining their colonies. Epidemiological surveys and laboratory experiments have demonstrated that the newly acquired virulence of several viruses belonging to the family Dicistroviridae (acute bee paralysis virus, Kashmir bee virus and Israeli acute paralysis virus) in Europe and the USA had been observed in relation with V. destructor acting as a disseminator of these viruses between and within bee colonies and as an activator of virus multiplication in the infected individuals: bee larvae and adults. Equal emphasis is given to deformed wing virus (DWV) belonging to the Iflaviridae. Overt outbreaks of DWV infections have been shown to be linked to the ability of V. destructor to act not only as a mechanical vector of DWV but also as a biological vector. Its replication in mites prior to its vectoring into pupae seemed to be necessary and sufficient for the induction of a overt infection in pupae developing in non-viable bees with deformed wings. DWV in V. destructor infested colonies is now considered as one of the key players of the final collapse. Various approaches for combating bee viral diseases are described: they include selection of tolerant bees, RNA interference and prevention of new pathogen introduction. None of these approaches are expected to lead to enhanced bee-health in the short term.

Isolation and characterization of Israeli acute paralysis virus, a dicistrovirus affecting honeybees in Israel: evidence for diversity due to intra- and inter-species recombination.

Rita Mozes-Koch, Edna Tanne, Yulia Gantman … (2007)
We report the isolation, purification, genome-sequencing and characterization of a picorna-like virus from dead bees in Israel. Sequence analysis indicated that IAPV (Israeli acute paralysis virus) is a distinct dicistrovirus. It is most homologous to Kashmir bee virus and acute bee paralysis virus. The virus carries a 9487 nt RNA genome in positive orientation, with two open reading frames separated by an intergenic region, and its coat comprises four major proteins, the sizes of which suggest alternate processing of the polyprotein. IAPV virions also carry shorter, defective-interfering (DI)-like RNAs. Some of these RNAs are recombinants of different segments of IAPV RNA, some are recombinants of IAPV RNA and RNA from another dicistrovirus, and yet others are recombinants of IAPV and non-viral RNAs. In several of the DI-like RNAs, a sense-oriented fragment has recombined with its complement, forming hairpins and stem-loop structures. In previous reports, we have shown that potyviral and IAPV sequences are integrated into the genome of their respective hosts. The dynamics of information exchange between virus and host and the possible resistance-engendering mechanisms are discussed.

This article was submitted to Virology, a section of the journal Frontiers in Microbiology