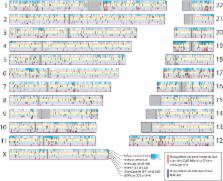 Retroviruses differ in their preferences for sites for viral DNA integration in the chromosomes of infected cells. Human immunodeficiency virus (HIV) integrates preferentially within active transcription units, whereas murine leukemia virus (MLV) integrates preferentially near transcription start sites and CpG islands. We investigated the viral determinants of integration-site selection using HIV chimeras with MLV genes substituted for their HIV counterparts. We found that transferring the MLV integrase (IN) coding region into HIV (to make HIVmIN) caused the hybrid to integrate with a specificity close to that of MLV. Addition of MLV gag (to make HIVmGagmIN) further increased the similarity of target-site selection to that of MLV. A chimeric virus with MLV Gag only (HIVmGag) displayed targeting preferences different from that of both HIV and MLV, further implicating Gag proteins in targeting as well as IN. We also report a genome-wide analysis indicating that MLV, but not HIV, favors integration near DNase I–hypersensitive sites (i.e., +/− 1 kb), and that HIVmIN and HIVmGagmIN also favored integration near these features. These findings reveal that IN is the principal viral determinant of integration specificity; they also reveal a new role for Gag-derived proteins, and strengthen models for integration targeting based on tethering of viral IN proteins to host proteins.

A required step in the replication cycle of retroviruses is the integration of a DNA copy of the viral genome into a host cell chromosome. Recent studies have shown that human immunodeficiency virus (HIV) and murine leukemia virus (MLV) favor integration near different chromosomal features. HIV preferentially targets active genes, while MLV prefers integration near start sites of gene transcription. The authors investigated integration-target site–selection by HIV derivatives substituted with segments of MLV to determine which viral proteins are responsible for integration-targeting preferences. They found that the viral integrase protein is the dominant determinant of integration-site selection, probably through its tethering to cellular proteins bound near preferred genomic regions. In addition, components of the viral structural polyprotein, Gag, appear to be involved in targeting. These findings provide a functional map of the viral proteins involved in directing integration-site selection.

U O’Doherty,  W J Swiggard,  Una O'Doherty … (2000)
The study of early events in the human immunodeficiency virus type 1 (HIV-1) life cycle can be limited by the relatively low numbers of cells that can be infected synchronously in vitro. Although the efficiency of HIV-1 infection can be substantially improved by centrifugal inoculation (spinoculation or shell vial methods), the underlying mechanism of enhancement has not been defined. To understand spinoculation in greater detail, we have used real-time PCR to quantitate viral particles in suspension, virions that associate with cells, and the ability of those virions to give rise to reverse transcripts. We report that centrifugation of HIV-1(IIIB) virions at 1,200 x g for 2 h at 25 degrees C increases the number of particles that bind to CEM-SS T-cell targets by approximately 40-fold relative to inoculation by simple virus-cell mixing. Following subsequent incubation at 37 degrees C for 5 h to allow membrane fusion and uncoating to occur, the number of reverse transcripts per target cell was similarly enhanced. Indeed, by culturing spinoculated samples for 24 h, approximately 100% of the target cells were reproducibly shown to be productively infected, as judged by the expression of p24(gag). Because the modest g forces employed in this procedure were found to be capable of sedimenting viral particles and because CD4-specific antibodies were effective at blocking virus binding, we propose that spinoculation works by depositing virions on the surfaces of target cells and that diffusion is the major rate-limiting step for viral adsorption under routine in vitro pulsing conditions. Thus, techniques that accelerate the binding of viruses to target cells not only promise to facilitate the experimental investigation of postentry steps of HIV-1 infection but should also help to enhance the efficacy of virus-based genetic therapies.

E. Holt,  T J Vasicek,  Tyra Wolfsberg … (2005)
A major goal in genomics is to understand how genes are regulated in different tissues, stages of development, diseases, and species. Mapping DNase I hypersensitive (HS) sites within nuclear chromatin is a powerful and well-established method of identifying many different types of regulatory elements, but in the past it has been limited to analysis of single loci. We have recently described a protocol to generate a genome-wide library of DNase HS sites. Here, we report high-throughput analysis, using massively parallel signature sequencing (MPSS), of 230,000 tags from a DNase library generated from quiescent human CD4+ T cells. Of the tags that uniquely map to the genome, we identified 14,190 clusters of sequences that group within close proximity to each other. By using a real-time PCR strategy, we determined that the majority of these clusters represent valid DNase HS sites. Approximately 80% of these DNase HS sites uniquely map within one or more annotated regions of the genome believed to contain regulatory elements, including regions 2 kb upstream of genes, CpG islands, and highly conserved sequences. Most DNase HS sites identified in CD4+ T cells are also HS in CD8+ T cells, B cells, hepatocytes, human umbilical vein endothelial cells (HUVECs), and HeLa cells. However, approximately 10% of the DNase HS sites are lymphocyte specific, indicating that this procedure can identify gene regulatory elements that control cell type specificity. This strategy, which can be applied to any cell line or tissue, will enable a better understanding of how chromatin structure dictates cell function and fate.

Human l1 retrotransposition is associated with genetic instability in vivo.

Suzanne T Szak,  Giovanni Parmigiani,  Gregory Cost … (2002)
Retrotransposons have shaped eukaryotic genomes for millions of years. To analyze the consequences of human L1 retrotransposition, we developed a genetic system to recover many new L1 insertions in somatic cells. Forty-two de novo integrants were recovered that faithfully mimic many aspects of L1s that accumulated since the primate radiation. Their structures experimentally demonstrate an association between L1 retrotransposition and various forms of genetic instability. Numerous L1 element inversions, extra nucleotide insertions, exon deletions, a chromosomal inversion, and flanking sequence comobilization (called 5' transduction) were identified. In a striking number of integrants, short identical sequences were shared between the donor and the target site's 3' end, suggesting a mechanistic model that helps explain the structure of L1 insertions.

* To whom correspondence should be addressed. E-mail: bushman@ 123456mail.med.upenn.edu