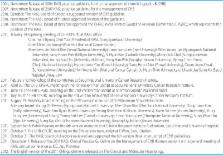 Author(s): The Korean Association for the Study of the Liver (KASL)

Publisher: The Korean Association for the Study of the Liver

Peginterferon Alfa-2a, lamivudine, and the combination for HBeAg-positive chronic hepatitis B.

Asian-Pacific consensus statement on the management of chronic hepatitis B: a 2008 update

Yun-Fan Liaw,  Nancy Leung,  Jia-Horng Kao … (2008)
Large amounts of new data on the natural history and treatment of chronic hepatitis B virus (HBV) infection have become available since 2005. These include long-term follow-up studies in large community-based cohorts or asymptomatic subjects with chronic HBV infection, further studies on the role of HBV genotype/naturally occurring HBV mutations, treatment of drug resistance and new therapies. In addition, Pegylated interferon α2a, entecavir and telbivudine have been approved globally. To update HBV management guidelines, relevant new data were reviewed and assessed by experts from the region, and the significance of the reported findings were discussed and debated. The earlier “Asian-Pacific consensus statement on the management of chronic hepatitis B” was revised accordingly. The key terms used in the statement were also defined. The new guidelines include general management, special indications for liver biopsy in patients with persistently normal alanine aminotransferase, time to start or stop drug therapy, choice of drug to initiate therapy, when and how to monitor the patients during and after stopping drug therapy. Recommendations on the therapy of patients in special circumstances, including women in childbearing age, patients with antiviral drug resistance, concurrent viral infection, hepatic decompensation, patients receiving immune-suppressive medications or chemotherapy and patients in the setting of liver transplantation, are also included.