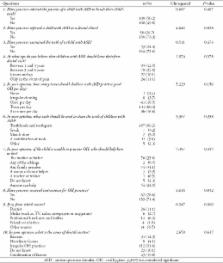 There were 305 questionnaires distributed to 7 special-needs centers between September and November 2014. A total of 217 questionnaires were collected with a response rate of 71.1%. The study took place in the College of Dentistry, King Saud University, Riyadh, Kingdom of Saudi Arabia.

Approximately 50.2% of the participants did not offer any toothbrushing advice, and 73.3% never recommended dental checkup visits to parents, and 75.6% never performed dental examinations to children under their care. Ten percent thought that children should have their first dental visit after 6 years of age. Almost all participants agreed that children should practice oral hygiene, and 60.4% think they should brush twice per day. In general, the participants choose toothbrushes and toothpaste as the main tools to perform oral hygiene. There were 35% of participants who believed that parents should be responsible for the children’s oral hygiene, and a few participants mentioned teachers and therapists to be responsible. Most of the participants (71.4%) did not receive any dental information from dental professional resources, only 14.3% of participants believed bacteria to be the cause of dental cavities.

There is a clear lack of dental knowledge and attitudes, and its practical application among the participating group of healthcare providers working with children with ASD in Riyadh.

Nancy Garon,  Lonnie Zwaigenbaum,  Susan E. Bryson (2013)
Earlier identification and diagnosis of autism spectrum disorders (ASDs) can improve opportunities for children to benefit from intervention and lessen the burden on concerned parents. This review summarizes current knowledge about early signs of autism. Convergent data from both retrospective studies and prospective studies of high-risk infants indicate that ASD symptoms emerge in the first two years of life, affecting multiple developmental domains, mapping onto symptom dimensions consistent with current diagnostic frameworks including social-communication, and repetitive interests/behaviors but also extending to motor delays and atypical regulation of attention and emotion. Recent findings have shed new light on patterns of symptom onset and progression, and promise to inform early detection and diagnosis. Further attention to effective application of new findings and related challenges in building health system capacity to ensure timely access to specialized assessment and interventions is needed to fully realize the promise of improved outcomes resulting from this research. Copyright © 2013 Elsevier B.V. All rights reserved.

James Guthrie,  Amy Wetherby,  Lauren B Swineford … (2013)
Although a diagnosis of autism spectrum disorder (ASD) appears to be stable in children as young as age three, few studies have explored stability of a diagnosis in younger children. Predictive value of diagnostic tools for toddlers and patterns of symptom change are important considerations for clinicians making early diagnoses. Most findings come from high-risk samples, but reports on children screened in community settings are also needed. Stability of diagnosis and Autism Diagnostic Observation Schedule – Toddler Module (ADOS-T) classifications and scores was examined across two time points in a sample of 82 children identified through the FIRST WORDS Project.Children received two comprehensive diagnostic evaluations at average ages of 19.39 (SD = 2.12) and 36.89 (SD = 3.85) months. Stability was 100% when confirming and ruling out a diagnosis of ASD based on a comprehensive diagnostic evaluation that included clinic and home observations,although diagnosis was initially deferred for 17% of the sample. Receiver Operating Characteristic curves revealed excellent sensitivity and acceptable specificity for the ADOS-T compared to concurrent diagnosis. Logistic regressions indicated good predictive value of initial ADOS-T scores for follow-up diagnosis. Finally, both ASD and Non-ASD children demonstrated a decrease in Social Affect scores (i.e.,improvement), whereas children with ASD demonstrated an increase in Restricted and Repetitive Behavior scores (i.e., worsening), changes that were accounted for by nonverbal developmental level in mixed model analyses. Short-term stability was documented for children diagnosed at 19 months on average, although a minority of children initially showed unclear diagnostic presentations.Findings highlight utility of the ADOS-T in making early diagnoses and predicting follow-up diagnoses. Children with ASD demonstrated improvement in social communication behaviors and unfolding of repetitive behaviors, suggesting that certain early patterns of change in symptoms may be characteristic of ASD. Autism spectrum disorder, developmental delay, diagnosis, development,assessment.

Physicians’ knowledge of and adherence to improving oral health

Sepideh Rabiei,  Simin Mohebbi,  Kristiina Patja … (2012)
Background Integration of oral health promotion into general health care has been highly recommended by the World Health Organization. Primary-care physicians can as part of their general health care promote and contribute to improved oral health care. Our aim was to investigate primary-care physicians’ knowledge of oral health, their attitudes toward delivering oral health care (OHC), and their willingness to obtain more education in this field. Methods We conducted a cross-sectional survey of all primary-care physicians working in the public health centers of Tehran city. An anonymous self-administered questionnaire queried their knowledge in pediatric- and general medicine-related areas of dentistry, providing knowledge scores to be calculated for three domains. The physicians’ attitudes toward OHC and willingness to pursue continuous education underwent evaluation with statements utilizing a 5-point Likert scale. Totally, 220 physicians took part in the survey (response rate: 92%). Chi-square test, linear and logistic regression, and t-test served for statistical analyses. Results The physicians’ knowledge score was significantly lower in the pediatric domain than in the dental and medical domains (p < 0.001). The number of physicians answering correctly to the pediatric questions was less than 40%. Almost all physicians (95%) reported it necessary for a physician to know about OHC and admitted (78%) that physicians’ general knowledge in this field is inadequate. Further, 77% of the physicians expressed a will to implement preventive oral health activities in their practice, and almost two-thirds (62%) of them showed a willingness to pursue further education about OHC. Those with higher knowledge scores had a greater willingness to deliver oral health care to their patients. Conclusions Physicians’ lack of knowledge of OHC and their generally positive attitudes toward it revealed a great need for planning of a continuous medical education program in primary care.

From the Department of Pediatric Dentistry and Orthodontics, College of Dentistry, King Saud University, Riyadh, Kingdom of Saudi Arabia