Reconstructing the Population Genetic History of the Caribbean 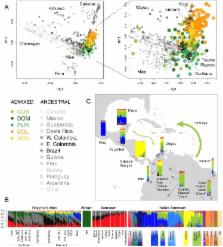 The Caribbean basin is home to some of the most complex interactions in recent history among previously diverged human populations. Here, we investigate the population genetic history of this region by characterizing patterns of genome-wide variation among 330 individuals from three of the Greater Antilles (Cuba, Puerto Rico, Hispaniola), two mainland (Honduras, Colombia), and three Native South American (Yukpa, Bari, and Warao) populations. We combine these data with a unique database of genomic variation in over 3,000 individuals from diverse European, African, and Native American populations. We use local ancestry inference and tract length distributions to test different demographic scenarios for the pre- and post-colonial history of the region. We develop a novel ancestry-specific PCA (ASPCA) method to reconstruct the sub-continental origin of Native American, European, and African haplotypes from admixed genomes. We find that the most likely source of the indigenous ancestry in Caribbean islanders is a Native South American component shared among inland Amazonian tribes, Central America, and the Yucatan peninsula, suggesting extensive gene flow across the Caribbean in pre-Columbian times. We find evidence of two pulses of African migration. The first pulse—which today is reflected by shorter, older ancestry tracts—consists of a genetic component more similar to coastal West African regions involved in early stages of the trans-Atlantic slave trade. The second pulse—reflected by longer, younger tracts—is more similar to present-day West-Central African populations, supporting historical records of later transatlantic deportation. Surprisingly, we also identify a Latino-specific European component that has significantly diverged from its parental Iberian source populations, presumably as a result of small European founder population size. We demonstrate that the ancestral components in admixed genomes can be traced back to distinct sub-continental source populations with far greater resolution than previously thought, even when limited pre-Columbian Caribbean haplotypes have survived.

Latinos are often regarded as a single heterogeneous group, whose complex variation is not fully appreciated in several social, demographic, and biomedical contexts. By making use of genomic data, we characterize ancestral components of Caribbean populations on a sub-continental level and unveil fine-scale patterns of population structure distinguishing insular from mainland Caribbean populations as well as from other Hispanic/Latino groups. We provide genetic evidence for an inland South American origin of the Native American component in island populations and for extensive pre-Columbian gene flow across the Caribbean basin. The Caribbean-derived European component shows significant differentiation from parental Iberian populations, presumably as a result of founder effects during the colonization of the New World. Based on demographic models, we reconstruct the complex population history of the Caribbean since the onset of continental admixture. We find that insular populations are best modeled as mixtures absorbing two pulses of African migrants, coinciding with the early and maximum activity stages of the transatlantic slave trade. These two pulses appear to have originated in different regions within West Africa, imprinting two distinguishable signatures on present-day Afro-Caribbean genomes and shedding light on the genetic impact of the slave trade in the Caribbean.

Farmers and their languages: the first expansions.

Don J. Diamond,  Peter Bellwood (2003)
The largest movements and replacements of human populations since the end of the Ice Ages resulted from the geographically uneven rise of food production around the world. The first farming societies thereby gained great advantages over hunter-gatherer societies. But most of those resulting shifts of populations and languages are complex, controversial, or both. We discuss the main complications and specific examples involving 15 language families. Further progress will depend on interdisciplinary research that combines archaeology, crop and livestock studies, physical anthropology, genetics, and linguistics.

Genomics for the world.

Correlation between genetic and geographic structure in Europe.

Oscar Lao,  Timothy Lu,  Michael Nothnagel … (2008)
Understanding the genetic structure of the European population is important, not only from a historical perspective, but also for the appropriate design and interpretation of genetic epidemiological studies. Previous population genetic analyses with autosomal markers in Europe either had a wide geographic but narrow genomic coverage [1, 2], or vice versa [3-6]. We therefore investigated Affymetrix GeneChip 500K genotype data from 2,514 individuals belonging to 23 different subpopulations, widely spread over Europe. Although we found only a low level of genetic differentiation between subpopulations, the existing differences were characterized by a strong continent-wide correlation between geographic and genetic distance. Furthermore, mean heterozygosity was larger, and mean linkage disequilibrium smaller, in southern as compared to northern Europe. Both parameters clearly showed a clinal distribution that provided evidence for a spatial continuity of genetic diversity in Europe. Our comprehensive genetic data are thus compatible with expectations based upon European population history, including the hypotheses of a south-north expansion and/or a larger effective population size in southern than in northern Europe. By including the widely used CEPH from Utah (CEU) samples into our analysis, we could show that these individuals represent northern and western Europeans reasonably well, thereby confirming their assumed regional ancestry.

¶ ERM and CDB are joint senior authors on this work.

JKB is an employee of Ancestry.com. CDB is on the Scientific Advisory Board of Ancestry.com, 23andMe's “Roots into the Future” project, and Personalis, Inc. He is on the medical advisory board of Invitae and Med-tek. None of these entities played any role in the project or research results reported here.

This project was supported by NIH grant 1R01GM090087 to ERM and CDB, NSF grant DMS-1201234 to CDB, the National Institute on Minority Health and Health Disparities (P60MD006902) to EGB, and NIH Training Grant T32 GM007175 to CRG. This work was also partially supported by an award from the Stanley J. Glaser Foundation to JLM and ERM, and by the George Rosenkranz Prize for Health Care Research in Developing Countries awarded to AME. The funders had no role in study design, data collection and analysis, decision to publish, or preparation of the manuscript.