Mechanism of the inhibitory effect of ghrelin in sepsis 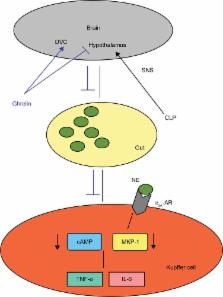 Sepsis and septic shock are the leading causes of death in intensive care units. Approximately 40%–70% of the mortality is associated with severe sepsis and septic shock. Systemic antibiotic usage, surgical intervention, aggressive fluid resuscitation and careful monitoring are common measures currently used to treat sepsis. Despite the advances in the understanding of the pathophysiology of sepsis, very little progress has been made towards therapeutic interventions. Recently we have shown that ghrelin, a stomach-derived peptide which is an endogenous ligand for the growth hormone secretagogue receptor (GHSR-1a), is beneficial in attenuating the inflammatory response, organ injury and mortality in an experimental model of polymicrobial sepsis induced by cecal ligation and puncture (CLP). In this review, we describe the mechanism of action of ghrelin in sepsis, highlight the role ghrelin plays in attenuating the hepatic dysfunction induced by sepsis and septic shock and suggest in developing ghrelin as a potential therapy for sepsis.

Epidemiology of severe sepsis in the United States: analysis of incidence, outcome, and associated costs of care.

Derek C Angus,  Walter Linde-Zwirble,  Jeffrey Lidicker … (2001)
To determine the incidence, cost, and outcome of severe sepsis in the United States. Observational cohort study. All nonfederal hospitals (n = 847) in seven U.S. states. All patients (n = 192,980) meeting criteria for severe sepsis based on the International Classification of Diseases, Ninth Revision, Clinical Modification. None. We linked all 1995 state hospital discharge records (n = 6,621,559) from seven large states with population and hospital data from the U.S. Census, the Centers for Disease Control, the Health Care Financing Administration, and the American Hospital Association. We defined severe sepsis as documented infection and acute organ dysfunction using criteria based on the International Classification of Diseases, Ninth Revision, Clinical Modification. We validated these criteria against prospective clinical and physiologic criteria in a subset of five hospitals. We generated national age- and gender-adjusted estimates of incidence, cost, and outcome. We identified 192,980 cases, yielding national estimates of 751,000 cases (3.0 cases per 1,000 population and 2.26 cases per 100 hospital discharges), of whom 383,000 (51.1%) received intensive care and an additional 130,000 (17.3%) were ventilated in an intermediate care unit or cared for in a coronary care unit. Incidence increased >100-fold with age (0.2/1,000 in children to 26.2/1,000 in those >85 yrs old). Mortality was 28.6%, or 215,000 deaths nationally, and also increased with age, from 10% in children to 38.4% in those >85 yrs old. Women had lower age-specific incidence and mortality, but the difference in mortality was explained by differences in underlying disease and the site of infection. The average costs per case were $22,100, with annual total costs of $16.7 billion nationally. Costs were higher in infants, nonsurvivors, intensive care unit patients, surgical patients, and patients with more organ failure. The incidence was projected to increase by 1.5% per annum. Severe sepsis is a common, expensive, and frequently fatal condition, with as many deaths annually as those from acute myocardial infarction. It is especially common in the elderly and is likely to increase substantially as the U.S. population ages.

Ghrelin is a growth-hormone-releasing acylated peptide from stomach.

Kenji Kangawa,  Yukari Date,  Masayasu Kojima … (1999)
Small synthetic molecules called growth-hormone secretagogues (GHSs) stimulate the release of growth hormone (GH) from the pituitary. They act through GHS-R, a G-protein-coupled receptor for which the ligand is unknown. Recent cloning of GHS-R strongly suggests that an endogenous ligand for the receptor does exist and that there is a mechanism for regulating GH release that is distinct from its regulation by hypothalamic growth-hormone-releasing hormone (GHRH). We now report the purification and identification in rat stomach of an endogenous ligand specific for GHS-R. The purified ligand is a peptide of 28 amino acids, in which the serine 3 residue is n-octanoylated. The acylated peptide specifically releases GH both in vivo and in vitro, and O-n-octanoylation at serine 3 is essential for the activity. We designate the GH-releasing peptide 'ghrelin' (ghre is the Proto-Indo-European root of the word 'grow'). Human ghrelin is homologous to rat ghrelin apart from two amino acids. The occurrence of ghrelin in both rat and human indicates that GH release from the pituitary may be regulated not only by hypothalamic GHRH, but also by ghrelin.