Identification and characterization of Sr13, a tetraploid wheat gene that confers resistance to the Ug99 stem rust race group 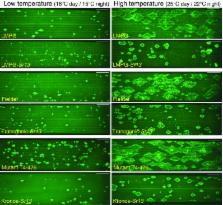 Wheat provides a substantial proportion of the calories and proteins consumed by humans, but further production increases are necessary to feed a growing human population. Reducing yield losses caused by pathogens can contribute to these increases. In this study, we report the identification of Sr13, a gene from pasta wheat that confers resistance to the new virulent races of the stem rust pathogen that appeared in Africa at the beginning of this century. We identified three different resistance forms of Sr13 and developed a diagnostic marker to accelerate their deployment in wheat breeding programs. In addition, Sr13 can be a useful component of transgenic cassettes including multiple resistance genes.

The Puccinia graminis f. sp. tritici ( Pgt) Ug99 race group is virulent to most stem rust resistance genes currently deployed in wheat and poses a threat to global wheat production. The durum wheat ( Triticum turgidum ssp. durum) gene Sr13 confers resistance to Ug99 and other virulent races, and is more effective at high temperatures. Using map-based cloning, we delimited a candidate region including two linked genes encoding coiled-coil nucleotide-binding leucine-rich repeat proteins designated CNL3 and CNL13. Three independent truncation mutations identified in each of these genes demonstrated that only CNL13 was required for Ug99 resistance. Transformation of an 8-kb genomic sequence including CNL13 into the susceptible wheat variety Fielder was sufficient to confer resistance to Ug99, confirming that CNL13 is Sr13. CNL13 transcripts were slightly down-regulated 2–6 days after Pgt inoculation and were not affected by temperature. By contrast, six pathogenesis-related ( PR) genes were up-regulated at high temperatures only when both Sr13 and Pgt were present, suggesting that they may contribute to the high temperature resistance mechanism. We identified three Sr13-resistant haplotypes, which were present in one-third of cultivated emmer and durum wheats but absent in most tested common wheats ( Triticum aestivum). These results suggest that Sr13 can be used to improve Ug99 resistance in a large proportion of modern wheat cultivars. To accelerate its deployment, we developed a diagnostic marker for Sr13. The identification of Sr13 expands the number of Pgt-resistance genes that can be incorporated into multigene transgenic cassettes to control this devastating disease.

Liselotte Selter,  Simon G. Krattinger,  Beat Keller … (2009)
Agricultural crops benefit from resistance to pathogens that endures over years and generations of both pest and crop. Durable disease resistance, which may be partial or complete, can be controlled by several genes. Some of the most devastating fungal pathogens in wheat are leaf rust, stripe rust, and powdery mildew. The wheat gene Lr34 has supported resistance to these pathogens for more than 50 years. Lr34 is now shared by wheat cultivars around the world. Here, we show that the LR34 protein resembles adenosine triphosphate-binding cassette transporters of the pleiotropic drug resistance subfamily. Alleles of Lr34 conferring resistance or susceptibility differ by three genetic polymorphisms. The Lr34 gene, which functions in the adult plant, stimulates senescence-like processes in the flag leaf tips and edges.

John Moore,  Sybil Herrera-Foessel,  Caixia Lan … (2015)
As there are numerous pathogen species that cause disease and limit yields of crops, such as wheat (Triticum aestivum), single genes that provide resistance to multiple pathogens are valuable in crop improvement. The mechanistic basis of multi-pathogen resistance is largely unknown. Here we use comparative genomics, mutagenesis and transformation to isolate the wheat Lr67 gene, which confers partial resistance to all three wheat rust pathogen species and powdery mildew. The Lr67 resistance gene encodes a predicted hexose transporter (LR67res) that differs from the susceptible form of the same protein (LR67sus) by two amino acids that are conserved in orthologous hexose transporters. Sugar uptake assays show that LR67sus, and related proteins encoded by homeoalleles, function as high-affinity glucose transporters. LR67res exerts a dominant-negative effect through heterodimerization with these functional transporters to reduce glucose uptake. Alterations in hexose transport in infected leaves may explain its ability to reduce the growth of multiple biotrophic pathogen species.

Ravi Singh,  David Hodson,  Yue Jin … (2015)
Race Ug99 (TTKSK) of Puccinia graminis f. sp. tritici, detected in Uganda in 1998, has been recognized as a serious threat to food security because it possesses combined virulence to a large number of resistance genes found in current widely grown wheat (Triticum aestivum) varieties and germplasm, leading to its potential for rapid spread and evolution. Since its initial detection, variants of the Ug99 lineage of stem rust have been discovered in Eastern and Southern African countries, Yemen, Iran, and Egypt. To date, eight races belonging to the Ug99 lineage are known. Increased pathogen monitoring activities have led to the identification of other races in Africa and Asia with additional virulence to commercially important resistance genes. This has led to localized but severe stem rust epidemics becoming common once again in East Africa due to the breakdown of race-specific resistance gene SrTmp, which was deployed recently in the 'Digalu' and 'Robin' varieties in Ethiopia and Kenya, respectively. Enhanced research in the last decade under the umbrella of the Borlaug Global Rust Initiative has identified various race-specific resistance genes that can be utilized, preferably in combinations, to develop resistant varieties. Research and development of improved wheat germplasm with complex adult plant resistance (APR) based on multiple slow-rusting genes has also progressed. Once only the Sr2 gene was known to confer slow rusting APR; now, four more genes-Sr55, Sr56, Sr57, and Sr58-have been characterized and additional quantitative trait loci identified. Cloning of some rust resistance genes opens new perspectives on rust control in the future through the development of multiple resistance gene cassettes. However, at present, disease-surveillance-based chemical control, large-scale deployment of new varieties with multiple race-specific genes or adequate levels of APR, and reducing the cultivation of susceptible varieties in rust hot-spot areas remains the best stem rust management strategy.

1W.Z. and S.C. contributed equally to this work.