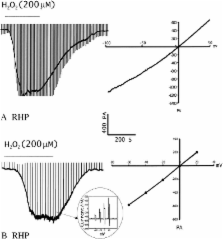 Marsha Penner,  Maria Parekh (1997)
Calcium influx in nonexcitable cells regulates such diverse processes as exocytosis, contraction, enzyme control, gene regulation, cell proliferation, and apoptosis. The dominant Ca2+ entry pathway in these cells is the store-operated one, in which Ca2+ entry is governed by the Ca2+ content of the agonist-sensitive intracellular Ca2+ stores. Only recently has a Ca2+ current been described that is activated by store depletion. The properties of this new current, called Ca2+ release-activated Ca2+ current (ICRAC), have been investigated in detail using the patch-clamp technique. Despite intense research, the nature of the signal that couples Ca2+ store content to the Ca2+ channels in the plasma membrane has remained elusive. Although ICRAC appears to be the most effective and widespread influx pathway, other store-operated currents have also been observed. Although the Ca2+ release-activated Ca2+ channel has not yet been cloned, evidence continues to accumulate that the Drosophila trp gene might encode a store-operated Ca2+ channel. In this review, we describe the historical development of the field of Ca2+ signaling and the discovery of store-operated Ca2+ currents. We focus on the electrophysiological properties of the prototype store-operated current ICRAC, discuss the regulatory mechanisms that control it, and finally consider recent advances toward the identification of molecular mechanisms involved in this ubiquitous and important Ca2+ entry pathway.

Hydrogen peroxide is an endothelium-derived hyperpolarizing factor in mice.

M Nakashima,  K Hirano,  Yasushi Mukai … (2000)
The endothelium plays an important role in maintaining vascular homeostasis by synthesizing and releasing several endothelium-derived relaxing factors, such as prostacyclin, nitric oxide (NO), and the previously unidentified endothelium-derived hyperpolarizing factor (EDHF). In this study, we examined our hypothesis that hydrogen peroxide (H(2)O(2)) derived from endothelial NO synthase (eNOS) is an EDHF. EDHF-mediated relaxation and hyperpolarization in response to acetylcholine (ACh) were markedly attenuated in small mesenteric arteries from eNOS knockout (eNOS-KO) mice. In the eNOS-KO mice, vasodilating and hyperpolarizing responses of vascular smooth muscle per se were fairly well preserved, as was the increase in intracellular calcium in endothelial cells in response to ACh. Antihypertensive treatment with hydralazine failed to improve the EDHF-mediated relaxation. Catalase, which dismutates H(2)O(2) to form water and oxygen, inhibited EDHF-mediated relaxation and hyperpolarization, but it did not affect endothelium-independent relaxation following treatment with the K(+) channel opener levcromakalim. Exogenous H(2)O(2) elicited similar relaxation and hyperpolarization in endothelium-stripped arteries. Finally, laser confocal microscopic examination with peroxide-sensitive fluorescence dye demonstrated that the endothelium produced H(2)O(2) upon stimulation by ACh and that the H(2)O(2) production was markedly reduced in eNOS-KO mice. These results indicate that H(2)O(2) is an EDHF in mouse small mesenteric arteries and that eNOS is a major source of the reactive oxygen species.