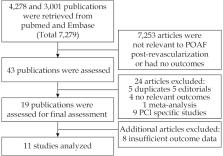 Post-operative atrial fibrillation (POAF) is a common yet understudied clinical issue after coronary artery bypass graft (CABG) leading to higher mortality rates and stroke. This systematic review and meta-analysis evaluated the rates of adverse outcomes between patients with and without POAF in patients treated with CABG or combined procedures.

The search period was from the beginning of PubMed and Embase to May 18 th, 2020 with no language restrictions. The inclusion criteria were: (1) studies comparing new onset atrial fibrillation before or after revascularization vs. no new onset AF before or after revascularization. The outcomes assessed included all-cause mortality, cardiac death, cerebral vascular accident (CVA), myocardial infarction (MI), repeated revascularization, major adverse cardiac event (MACE), and major adverse cardiac and cerebrovascular events (MACCEs).

Patients with POAF after CABG or combined procedures are at an increased risk of all-cause mortality or CVAs. Therefore, POAF after such procedures should be closely monitored and treated judiciously to minimize risk of further complications. While there are studies on POAF versus no POAF on outcomes, the heterogeneity suggests that further studies are needed.

Inflammation of atrium after cardiac surgery is associated with inhomogeneity of atrial conduction and atrial fibrillation.

M Zakkar,  R Ascione,  A James … (2015)
Postoperative atrial fibrillation (POAF) is a common complication of cardiac surgery that occurs in up to 60% of patients. POAF is associated with increased risk of cardiovascular mortality, stroke and other arrhythmias that can impact on early and long term clinical outcomes and health economics. Many factors such as disease-induced cardiac remodelling, operative trauma, changes in atrial pressure and chemical stimulation and reflex sympathetic/parasympathetic activation have been implicated in the development of POAF. There is mounting evidence to support a major role for inflammation and oxidative stress in the pathogenesis of POAF. Both are consequences of using cardiopulmonary bypass and reperfusion following ischaemic cardioplegic arrest. Subsequently, several anti-inflammatory and antioxidant drugs have been tested in an attempt to reduce the incidence of POAF. However, prevention remains suboptimal and thus far none of the tested drugs has provided sufficient efficacy to be widely introduced in clinical practice. A better understanding of the cellular and molecular mechanisms responsible for the onset and persistence of POAF is needed to develop more effective prediction and interventions.

Akshat Saxena,  Diem DINH,  Julian A Smith … (2012)
Several studies have shown that postoperative atrial fibrillation (POAF) is associated with poorer short- and long-term outcomes after isolated coronary artery bypass grafting surgery. Nevertheless, there is considerable debate as to whether this reflects an independent association of POAF with poorer outcomes or confounding by other factors. We sought to investigate this issue. Data obtained from June 2001 through December 2009 by the Australasian Society of Cardiac and Thoracic Surgeons National Cardiac Surgery Database Program were retrospectively analyzed. Demographic and operative data were compared between patients who developed POAF and those who did not using chi-square and t tests. The independent impact of POAF on 14 short-term complications and long-term mortality was determined using binary logistic and Cox regression, respectively. Excluding patients with preoperative arrhythmia, isolated coronary artery bypass grafting surgery was performed in 19,497 patients. Of these, 5,547 (28.5%) developed POAF. Patients with POAF were generally older (mean age 69 vs 65 years, p <0.001) and presented more often with co-morbidities including congestive heart failure (p <0.001), hypertension (p <0.001), cerebrovascular disease (p <0.001), and renal failure (p = 0.046). Patients with POAF demonstrated a greater 30-day mortality on univariate analysis but not on multivariate analysis (p = 0.376). Patients with POAF were, however, at an independently increased risk of perioperative complications including permanent stroke (p <0.001), new renal failure (p <0.001), infective complications (p <0.001), gastrointestinal complications (p <0.001), and return to the theater (p <0.001). POAF was also independently associated with shorter long-term survival (p = 0.002). In conclusion, POAF is a risk factor for short-term morbidity and decreased long-term survival. Rigorous evaluation of various therapies that prevent or decrease the impact of POAF is imperative. Moreover, patients who develop POAF should undergo strict surveillance and be routinely screened for complications after discharge. Copyright © 2012 Elsevier Inc. All rights reserved.