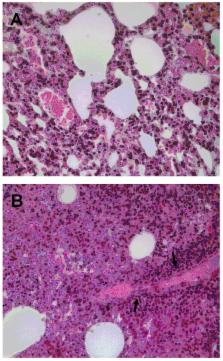 Brill-Zinsser disease, the relapsing form of epidemic typhus, typically occurs in a susceptible host years or decades after the primary infection; however, the mechanisms of reactivation and the cellular reservoir during latency are poorly understood. Herein we describe a murine model for Brill-Zinsser disease, and use PCR and cell culture to show transient rickettsemia in mice treated with dexamethasone >3 months after clinical recovery from the primary infection. Treatment of similarly infected mice with cyclosporine failed to produce recrudescent bacteremia. Therapy with doxycycline for the primary infection prevented recrudescent bacteremia in most of these mice following treatment with dexamethasone. Rickettsia prowazekii (the etiologic agent of epidemic typhus) was detected by PCR, cell culture, and immunostaining methods in murine adipose tissue, but not in liver, spleen, lung, or central nervous system tissues of mice 4 months after recovery from the primary infection. The lungs of dexamethasone-treated mice showed impaired expression of β-defensin transcripts that may be involved in the pathogenesis of pulmonary lesions. In vitro, R. prowazekii rickettsiae infected and replicated in the murine adipocyte cell line 3T3-L1. Collectively these data suggest a role for adipose tissue as a potential reservoir for dormant infections with R. prowazekii.

Citrate synthase gene comparison, a new tool for phylogenetic analysis, and its application for the rickettsiae.

Ana V. Diez Roux,  E B Rydkina,  M Eremeeva … (1997)
Using PCR and an automated laser fluorescent DNA sequencer, we amplified and sequenced a 1,234-bp fragment of the citrate synthase-encoding gene (gltA) of 28 bacteria belonging to the genus Rickettsia. Comparative sequence analysis showed that most of the spotted fever group (SFG) rickettsiae belonged to one of two subgroups. The first subgroup included Rickettsia massiliae, strain Bar 29, Rickettsia rhipicephali, "Rickettsia aeschlimanni," and Rickettsia montana, which have been isolated only from ticks. The second subgroup was larger and included the majority of the human pathogens and also rickettsiae isolated only from ticks; the members of this subgroup were strain S, Rickettsia africae, "Rickettsia monglotimonae," Rickettsia sibirica, Rickettsia parkeri, Rickettsia conorii, Rickettsia rickettsii, the Thai tick typhus rickettsia, the Israeli tick typhus rickettsia, the Astrakhan fever rickettsia, "Rickettsia slovaca," and Rickettsia japonica. The sequence analysis also showed that the tick-borne organisms Rickettsia helvetica and Rickettsia australis and the mite-borne organism Rickettsia akari were associated with the SFG cluster, that Rickettsia prowazekii and Rickettsia typhi, two representatives of the typhus group, clustered together, and that Rickettsia canada; Rickettsia bellii, and the AB bacterium probably represent three new groups. We compared the phylogenetic trees inferred from citrate synthase gene sequences and from 16S ribosomal DNA (rDNA) sequences. For rickettsial phylogeny, the citrate synthase approach was more suitable, as demonstrated by significant bootstrap values for all of the nodes except those in the larger subgroup defined above. We also compared phylogenetic analysis results obtained in a comparison of the sequences of both genes for all of the representatives of the domain Bacteria for which the gltA sequence was determined. We believe that comparison of gltA sequences could be a complementary approach to 16S rDNA sequencing for inferring bacterial evolution, especially when unstable phylogenetic models are obtained from ribosomal sequences because of high levels of sequence similarity between the bacteria studied.

Sonya M. Abraham,  Toby Lawrence,  Anna Kleiman … (2006)
Glucocorticoids (GCs), which are used in the treatment of immune-mediated inflammatory diseases, inhibit the expression of many inflammatory mediators. They can also induce the expression of dual specificity phosphatase 1 (DUSP1; otherwise known as mitogen-activated protein kinase [MAPK] phosphatase 1), which dephosphorylates and inactivates MAPKs. We investigated the role of DUSP1 in the antiinflammatory action of the GC dexamethasone (Dex). Dex-mediated inhibition of c-Jun N-terminal kinase and p38 MAPK was abrogated in DUSP1−/− mouse macrophages. Dex-mediated suppression of several proinflammatory genes (including tumor necrosis factor, cyclooxygenase 2, and interleukin 1α and 1β) was impaired in DUSP1−/− mouse macrophages, whereas other proinflammatory genes were inhibited by Dex in a DUSP1-independent manner. In vivo antiinflammatory effects of Dex on zymosan-induced inflammation were impaired in DUSP1−/− mice. Therefore, the expression of DUSP1 is required for the inhibition of proinflammatory signaling pathways by Dex in mouse macrophages. Furthermore, DUSP1 contributes to the antiinflammatory effects of Dex in vitro and in vivo.

The body louse as a vector of reemerging human diseases.

D Raoult,  Ana V. Diez Roux (1999)
The body louse, Pediculus humanus humanus, is a strict human parasite, living and multiplying in clothing. Louse infestation is associated with cold weather and a lack of hygiene. Three pathogenic bacteria are transmitted by the body louse. Borrelia recurrentis is a spirochete, the agent of relapsing fever, recently cultured on axenic medium. Historically, massive outbreaks have occurred in Eurasia and Africa, but currently the disease is found only in Ethiopia and neighboring countries. Bartonella quintana is now recognized as an agent of bacillary angiomatosis bacteremia, trench fever, endocarditis, and chronic lymphadenopathy among the homeless. Rickettsia prowazekii is the agent of epidemic typhus. The most recent outbreak (and the largest since World War II) was observed in Burundi. A small outbreak was also reported in Russia in 1997. Louse infestation appears to become more prevalent worldwide, associated with a decline in social and hygienic conditions provoked by civil unrest and economic instability.

Publisher ID: 09-PONE-RA-13529R1
DOI: 10.1371/journal.pone.0008547
PMC ID: 2797295
PubMed ID: 20049326
Copyright statement: Bechah et al. This is an open-access article distributed under the terms of the Creative Commons Attribution License, which permits unrestricted use, distribution, and reproduction in any medium, provided the original author and source are credited.