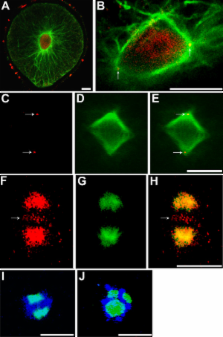 Kinesin-5 (Eg-5) motor proteins are essential for maintenance of spindle bipolarity in animals. The roles of Kinesin-5 proteins in other systems, such as Arabidopsis, Dictyostelium, and sea urchin are more varied. We are studying Kinesin-5-like proteins during early development in the brown alga Silvetia compressa. Previously, this motor was shown to be needed to assemble a bipolar spindle, similar to animals. This report builds on those findings by investigating the localization of the motor and probing its function in spindle maintenance.

Anti-Eg5 antibodies were used to investigate localization of Kinesin-5-like proteins in brown algal zygotes. In interphase zygotes, localization was predominantly within the nucleus. As zygotes entered mitosis, these motor proteins strongly associated with spindle poles and, to a lesser degree, with the polar microtubule arrays and the spindle midzone. In order to address whether Kinesin-5-like proteins are required to maintain spindle bipolarity, we applied monastrol to synchronized zygotes containing bipolar spindles. Monastrol is a cell-permeable chemical inhibitor of the Kinesin-5 class of molecular motors. We found that inhibition of motor function in pre-formed spindles induced the formation of multipolar spindles and short bipolar spindles.

Based upon these localization and inhibitor studies, we conclude that Kinesin-5-like motors in brown algae are more similar to the motors of animals than those of plants or protists. However, Kinesin-5-like proteins in S. compressa serve novel roles in spindle formation and maintenance not observed in animals.

The bipolar mitotic kinesin Eg5 moves on both microtubules that it crosslinks.

Lukas Kapitein, Erwin J. G. Peterman, Benjamin H Kwok … (2005)
During cell division, mitotic spindles are assembled by microtubule-based motor proteins. The bipolar organization of spindles is essential for proper segregation of chromosomes, and requires plus-end-directed homotetrameric motor proteins of the widely conserved kinesin-5 (BimC) family. Hypotheses for bipolar spindle formation include the 'push-pull mitotic muscle' model, in which kinesin-5 and opposing motor proteins act between overlapping microtubules. However, the precise roles of kinesin-5 during this process are unknown. Here we show that the vertebrate kinesin-5 Eg5 drives the sliding of microtubules depending on their relative orientation. We found in controlled in vitro assays that Eg5 has the remarkable capability of simultaneously moving at approximately 20 nm s(-1) towards the plus-ends of each of the two microtubules it crosslinks. For anti-parallel microtubules, this results in relative sliding at approximately 40 nm s(-1), comparable to spindle pole separation rates in vivo. Furthermore, we found that Eg5 can tether microtubule plus-ends, suggesting an additional microtubule-binding mode for Eg5. Our results demonstrate how members of the kinesin-5 family are likely to function in mitosis, pushing apart interpolar microtubules as well as recruiting microtubules into bundles that are subsequently polarized by relative sliding.

Analysis of the kinesin superfamily: insights into structure and function.

Harukata Miki, Yasushi Okada, Nobutaka Hirokawa (2005)
Kinesin superfamily proteins (KIFs) are key players or 'hub' proteins in the intracellular transport system, which is essential for cellular function and morphology. The KIF superfamily is also the first large protein family in mammals whose constituents have been completely identified and confirmed both in silico and in vivo. Numerous studies have revealed the structures and functions of individual family members; however, the relationships between members or a perspective of the whole superfamily structure until recently remained elusive. Here, we present a comprehensive summary based on a large, systematic phylogenetic analysis of the kinesin superfamily. All available sequences in public databases, including genomic information from all model organisms, were analyzed to yield the most complete phylogenetic kinesin tree thus far, comprising 14 families. This comprehensive classification builds on the recently proposed standardized nomenclature for kinesins and allows systematic analysis of the structural and functional relationships within the kinesin superfamily.

Tarun Kapoor, Thomas U Mayer, Margaret L. Coughlin … (2000)
Monastrol, a cell-permeable small molecule inhibitor of the mitotic kinesin, Eg5, arrests cells in mitosis with monoastral spindles. Here, we use monastrol to probe mitotic mechanisms. We find that monastrol does not inhibit progression through S and G2 phases of the cell cycle or centrosome duplication. The mitotic arrest due to monastrol is also rapidly reversible. Chromosomes in monastrol-treated cells frequently have both sister kinetochores attached to microtubules extending to the center of the monoaster (syntelic orientation). Mitotic arrest–deficient protein 2 (Mad2) localizes to a subset of kinetochores, suggesting the activation of the spindle assembly checkpoint in these cells. Mad2 localizes to some kinetochores that have attached microtubules in monastrol-treated cells, indicating that kinetochore microtubule attachment alone may not satisfy the spindle assembly checkpoint. Monastrol also inhibits bipolar spindle formation in Xenopus egg extracts. However, it does not prevent the targeting of Eg5 to the monoastral spindles that form. Imaging bipolar spindles disassembling in the presence of monastrol allowed direct observations of outward directed forces in the spindle, orthogonal to the pole-to-pole axis. Monastrol is thus a useful tool to study mitotic processes, detection and correction of chromosome malorientation, and contributions of Eg5 to spindle assembly and maintenance.