Targets and self-management for the control of blood pressure in stroke and at risk groups (TASMIN-SR): protocol for a randomised controlled trial 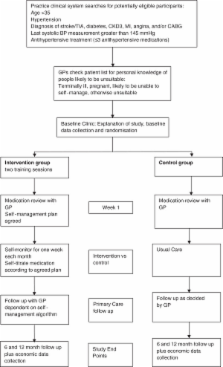 Self-monitoring of hypertension with self-titration of antihypertensives (self-management) results in lower systolic blood pressure for at least one year. However, few people in high risk groups have been evaluated to date and previous work suggests a smaller effect size in these groups. This trial therefore aims to assess the added value of self-management in high risk groups over and above usual care.

The targets and self-management for the control of blood pressure in stroke and at risk groups (TASMIN-SR) trial will be a pragmatic primary care based, unblinded, randomised controlled trial of self-management of blood pressure (BP) compared to usual care. Eligible patients will have a history of stroke, coronary heart disease, diabetes or chronic kidney disease and will be recruited from primary care. Participants will be individually randomised to either usual care or self-management. The primary outcome of the trial will be difference in office SBP between intervention and control groups at 12 months adjusted for baseline SBP and covariates. 540 patients will be sufficient to detect a difference in SBP between self-management and usual care of 5 mmHg with 90% power. Secondary outcomes will include self-efficacy, lifestyle behaviours, health-related quality of life and adverse events. An economic analysis will consider both within trial costs and a model extrapolating the results thereafter. A qualitative analysis will gain insights into patients’ views, experiences and decision making processes.

The results of the trial will be directly applicable to primary care in the UK. If successful, self-management of blood pressure in people with stroke and other high risk conditions would be applicable to many hundreds of thousands of individuals in the UK and beyond.

Paul Dolan (1997)
It has become increasingly common for preference-based measures of health-related quality of life to be used in the evaluation of different health-care interventions. For one such measure, The EuroQol, designed to be used for these purposes, it was necessary to derive a single index value for each of the 243 health states it generates. The problem was that it was virtually impossible to generate direct valuations for all of these states, and thus it was necessary to find a procedure that allows the valuations of all EuroQol states to be interpolated from direct valuations on a subset of these. In a recent study, direct valuations were elicited for 42 EuroQol health states (using the time trade-off method) from a representative sample of the UK population. This article reports on the methodology that was adopted to build up a "tariff" of EuroQol values from this data. A parsimonious model that fits the data well was defined as one in which valuations were explained in terms of the level of severity associated with each dimension, an intercept associated with any move away from full health, and a term that picked up whether any dimension in the state was at its most severe level. The model presented in this article appears to predict the values of the states for which there are direct observations and, thus, can be used to interpolate values for the states for which no direct observations exist.

Use of blood pressure lowering drugs in the prevention of cardiovascular disease: meta-analysis of 147 randomised trials in the context of expectations from prospective epidemiological studies