MicroRNA Alterations in a Tg501 Mouse Model of Prion Disease 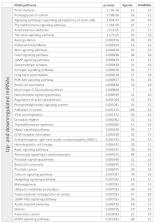 MicroRNAs (miRNAs) may contribute to the development and pathology of many neurodegenerative diseases, including prion diseases. They are also promising biomarker candidates due to their stability in body fluids. We investigated miRNA alterations in a Tg501 mouse model of prion diseases that expresses a transgene encoding the goat prion protein ( PRNP). Tg501 mice intracranially inoculated with mouse-adapted goat scrapie were compared with age-matched, mock inoculated controls in preclinical and clinical stages. Small RNA sequencing from the cervical spinal cord indicated that miR-223-3p, miR-151-3p, and miR-144-5p were dysregulated in scrapie-inoculated animals before the onset of symptoms. In clinical-stage animals, 23 significant miRNA alterations were found. These miRNAs were predicted to modify the Kyoto Encyclopedia of Genes and Genomes (KEGG) pathways including prion disease, extracellular matrix interactions, glutaminergic synapse, axon guidance, and transforming growth factor-beta signaling. MicroRNAs miR-146a-5p (up in cervical spinal cord) and miR-342-3p (down in cervical spinal cord, cerebellum and plasma), both indicated in neurodegenerative diseases earlier, were verified by quantitative real-time polymerase chain reaction (qRT-PCR). Minimal changes observed before the disease onset suggests that most miRNA alterations observed here are driven by advanced prion-associated pathology, possibly limiting their use as diagnostic markers. However, the results encourage further mechanistic studies on miRNA-regulated pathways involved in these neurodegenerative conditions.

Frank Schildberg,  A Rieger,  Veit Hornung … (2012)
Inflammasomes are multiprotein signaling platforms that form upon sensing microbe- or damage-associated molecular patterns. Upon their formation, caspase-1 is activated, leading to the processing of certain proinflammatory cytokines and the initiation of a special type of cell death, known as pyroptosis. Among known inflammasomes, NLRP3 takes on special importance because it appears to be a general sensor of cell stress. Moreover, unlike other inflammasome sensors, NLRP3 inflammasome activity is under additional transcriptional regulation. In this study, we identify the myeloid-specific microRNA miR-223 as another critical regulator of NLRP3 inflammasome activity. miR-223 suppresses NLRP3 expression through a conserved binding site within the 3' untranslated region of NLRP3, translating to reduced NLRP3 inflammasome activity. Although miR-223 itself is not regulated by proinflammatory signals, its expression varies among different myeloid cell types. Therefore, given the tight transcriptional control of NLRP3 message itself, miR-223 functions as an important rheostat controlling NLRP3 inflammasome activity.