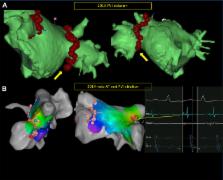 ScienceOpenPublisherPMC
Bookmark
There is no author summary for this article yet. Authors can add summaries to their articles on ScienceOpen to make them more accessible to a non-specialist audience.
Introduction Key Teaching Points • Pulmonary vein aneurysms are rare primary or secondary defects that can be found in the left atrium. • Atrial tachycardia and atrial fibrillation can be triggered from a pulmonary vein aneurysm. • These arrhythmias can be ablated or the aneurysm can be excised surgically. We report a case of focal atrial tachycardia and atrial fibrillation that resulted from a pulmonary vein aneurysm, a rare anatomic condition that presents difficulties in successful treatment. Case report A 30-year-old pregnant woman (30th week of pregnancy, G1/P0), was referred to our department in 2006 for evaluation of symptomatic palpitations with increased frequency and duration since the beginning of her pregnancy. Her medical history was otherwise uneventful. Clinical examination and laboratory investigations were normal. The rest electrocardiogram showed a normal sinus rhythm. The 7-day Holter showed daily episodes of supraventricular tachycardia at 270 beats/min, which could be induced during stress testing (Figure 1A and B). The transthoracic echocardiography displayed no structural heart disease. Owing to pregnancy, more invasive investigations were deferred. The patient was reassured of the benign course of the arrhythmia and advised to take metoprolol 50 mg as “pill in the pocket” therapy. Figure 1 Electrocardiograms during sinus rhythm, atrial tachycardia (AT), and atrial fibrillation (AF). A: Normal SR, 78 beats/min (bpm). B: AT (short RP′) at 270 bpm during an exercise test prior to the radiofrequency ablation, hemodynamically stable, no effect of adenosine administration. C: Focal AT during the ablation procedure, successfully ablated at the right inferior pulmonary vein aneurysm. D: Paroxysmal AF, treated with pulmonary vein isolation. Two years later, she returned to our center owing to a recurrence of the arrhythmia. An electrophysiological examination was subsequently carried out and demonstrated atrial tachycardia of septal or left-sided localization without any signs of accessory pathway or slow pathway, suggesting an atrioventricular nodal reentry tachycardia or atrioventricular reentrant tachycardia. Because of the difficulty of triggering the arrhythmia and the lack of electroanatomic mapping system, no ablation was performed and medical therapy consisting of bisoprolol 1.25 mg daily and flecainide 100 mg twice daily was initiated. In 2009, a second electrophysiological examination using electroanatomic mapping was performed and a focal ectopic atrial tachycardia (Figure 1C) of the right inferior pulmonary vein (RIPV) was mapped and treated (Supplemental Figure). During the procedure, an episode of paroxysmal atrial fibrillation was also observed (Figure 1D). During the following months, the patient completed a second pregnancy, during which a slight increase in the frequency of the palpitations was noted. The following 3 years were initially uneventful, but new supraventricular arrhythmias were more frequently triggered, including paroxysmal atrial fibrillation. Oral anticoagulation with rivaroxaban was introduced and a pulmonary vein isolation (PVI) was planned with prior heart computed tomography angiography. This examination revealed an aneurysm of the RIPV measuring 29 × 25 mm (Figure 2). A cautious PVI was performed successfully at the venous side of the aneurysm, using contact force < 10g (Figure 3A). Afterward, no arrhythmia was inducible. However, a relapse prompted the decision to switch the antiarrhythmic therapy to dronedarone. Figure 2 Computed tomography (CT) and magnetic resonance (MR) images of the pulmonary vein aneurysm. Illustrates stable dimensions of the right inferior pulmonary vein aneurysm over 3 years (multidetector CT on the left, MR angiography on the right). Figure 3 Electroantomic mapping radiofrequency ablation in 2013 and 2014. A: Prior acquired cardiac computed tomography angiography images are integrated and merged into the electroanatomic mapping system (CARTO 3, Biosense Webster, Diamond Bar, CA). Red points are ablation points. Ablation is performed at the venous side (arrows) of the aneurysm of the right inferior pulmonary vein. B: Activation map using CARTO 3 (Biosense Webster) of a focal AT (earliest focal spread from the red area within the aneurysm) that was ablated at the earliest sharp and fragmented bipolar electrogram (small arrow). Redo pulmonary vein isolation was performed using Visitag. The right inferior pulmonary vein was ablated on the venous side of the aneurysm. A further relapse of a left focal atrial tachycardia from the RIPV aneurysm was treated together with a redo PVI, by means of radiofrequency ablation in 2014 (Figure 3B). A cardiac magnetic resonance imaging performed 3 years after the computed tomography angiography indicated a stable diameter of the pulmonary vein aneurysm (PVA). The patient has since remained asymptomatic without antiarrhythmic drugs. Discussion Pulmonary vein aneurysms are rare defects of the vascular wall, first described by Pucher in 1843. 1 Most PVAs (80%) are thought to be congenital, often associated with other congenital diseases or with arteriovenous malformations. A small minority of PVAs are acquired, secondary to significant mitral regurgitation 2 or trauma. Although most of them are benign and incidentally discovered, cases have been described with complications such as hemoptysis, stroke, 3 and even sudden death. These aneurysms can trigger supraventricular arrhythmia and can be treated by ablation.4, 5 Theoretically, high contact and ablation could also create an aneurysm. We cannot exclude this possibility, since imaging was only performed after the first left-sided ablation. PVAs are often difficult to ablate and surgical excision of the aneurysm can be performed.3, 6 It is important for electrophysiologists to be aware of this anatomic anomaly. Most centers perform PVI without image guiding prior to or during the case. In case of anatomic anomalies, imaging can, however, be very useful to help understand the arrhythmia and guide the treatment.

Dilatation as a marker of pulmonary veins initiating atrial fibrillation.

Teiichi Yamane,  Dipen Shah,  Pierre Jaïs … (2002)
The pulmonary veins (PVs) have been shown to trigger paroxysmal atrial fibrillation. The relationship of anatomical dimensions versus arrhythmogenicity has not been assessed.

Aneurysm of the pulmonary vein: an unusual cause of stroke