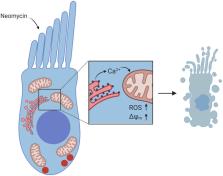 Hair cells are the mechanosensory receptors of the inner ear and can be damaged by noise, aging, and ototoxic drugs. This damage often results in permanent sensorineural hearing loss. Hair cells have high energy demands and rely on mitochondria to produce ATP as well as contribute to intracellular calcium homeostasis. In addition to generating ATP, mitochondria produce reactive oxygen species, which can lead to oxidative stress, and regulate cell death pathways. Zebrafish lateral-line hair cells are structurally and functionally analogous to cochlear hair cells but are optically and pharmacologically accessible within an intact specimen, making the zebrafish a good model in which to study hair-cell mitochondrial activity. Moreover, the ease of genetic manipulation of zebrafish embryos allows for the study of mutations implicated in human deafness, as well as the generation of transgenic models to visualize mitochondrial calcium transients and mitochondrial activity in live organisms. Studies of the zebrafish lateral line have shown that variations in mitochondrial activity can predict hair-cell susceptibility to damage by aminoglycosides or noise exposure. In addition, antioxidants have been shown to protect against noise trauma and ototoxic drug–induced hair-cell death. In this review, we discuss the tools and findings of recent investigations into zebrafish hair-cell mitochondria and their involvement in cellular processes, both under homeostatic conditions and in response to noise or ototoxic drugs. The zebrafish lateral line is a valuable model in which to study the roles of mitochondria in hair-cell pathologies and to develop therapeutic strategies to prevent sensorineural hearing loss in humans.

A common mechanism of cellular death induced by bactericidal antibiotics.

Michael A Kohanski,  Daniel Dwyer,  Boris Hayete … (2007)
Antibiotic mode-of-action classification is based upon drug-target interaction and whether the resultant inhibition of cellular function is lethal to bacteria. Here we show that the three major classes of bactericidal antibiotics, regardless of drug-target interaction, stimulate the production of highly deleterious hydroxyl radicals in Gram-negative and Gram-positive bacteria, which ultimately contribute to cell death. We also show, in contrast, that bacteriostatic drugs do not produce hydroxyl radicals. We demonstrate that the mechanism of hydroxyl radical formation induced by bactericidal antibiotics is the end product of an oxidative damage cellular death pathway involving the tricarboxylic acid cycle, a transient depletion of NADH, destabilization of iron-sulfur clusters, and stimulation of the Fenton reaction. Our results suggest that all three major classes of bactericidal drugs can be potentiated by targeting bacterial systems that remediate hydroxyl radical damage, including proteins involved in triggering the DNA damage response, e.g., RecA.

Martin Schuler,  Erin L Hayes,  Douglas R. Green … (2004)
The tumor suppressor p53 exerts its anti-neoplastic activity primarily through the induction of apoptosis. We found that cytosolic localization of endogenous wild-type or trans-activation-deficient p53 was necessary and sufficient for apoptosis. p53 directly activated the proapoptotic Bcl-2 protein Bax in the absence of other proteins to permeabilize mitochondria and engage the apoptotic program. p53 also released both proapoptotic multidomain proteins and BH3-only proteins [Proapoptotic Bcl-2 family proteins that share only the third Bcl-2 homology domain (BH3)] that were sequestered by Bcl-xL. The transcription-independent activation of Bax by p53 occurred with similar kinetics and concentrations to those produced by activated Bid. We propose that when p53 accumulates in the cytosol, it can function analogously to the BH3-only subset of proapoptotic Bcl-2 proteins to activate Bax and trigger apoptosis.

p53 has a direct apoptogenic role at the mitochondria.

Motohiro Mihara,  Susan H. Erster,  Alexander Zaika … (2003)
p53 induces apoptosis by target gene regulation and transcription-independent signaling. However, a mechanism for the latter was unknown. We recently reported that a fraction of induced p53 translocates to the mitochondria of apoptosing tumor cells. Targeting p53 to mitochondria is sufficient to launch apoptosis. Here, we provide evidence that p53 translocation to the mitochondria occurs in vivo in irradiated thymocytes. Further, we show that the p53 protein can directly induce permeabilization of the outer mitochondrial membrane by forming complexes with the protective BclXL and Bcl2 proteins, resulting in cytochrome c release. p53 binds to BclXL via its DNA binding domain. We probe the significance of mitochondrial p53 and show that tumor-derived transactivation-deficient mutants of p53 concomitantly lose the ability to interact with BclXL and promote cytochrome c release. This opens the possibility that mutations might represent "double-hits" by abrogating the transcriptional and mitochondrial apoptotic activity of p53.