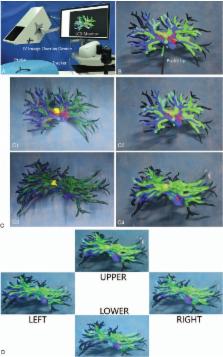 Patients who undergo hilar cholangiocarcinoma (HCAC) resection with concomitant hepatectomy have a high risk of postoperative morbidity and mortality due to surgical trauma to the hepatic and biliary vasculature.

Magnetic resonance cholangiopancreatography and enhanced computed tomography (CT) scanning revealed a mass over the biliary tree at the porta hepatis, which diagnosed to be s a hilar cholangiocarcinoma.

Three-dimensional (3D) images of the patient's hepatic and biliary structures were reconstructed preoperatively from CT data, and the 3D images were used for preoperative planning and augmented reality (AR)-assisted intraoperative navigation during open HCAC resection with hemihepatectomy. A 3D-printed model of the patient's biliary structures was also used intraoperatively as a visual reference.

No serious postoperative complications occurred, and the patient was tumor-free at the 9-month follow-up examination based on CT results.

AR-assisted preoperative planning and intraoperative navigation might be beneficial in other patients with HCAC patients to reduce postoperative complications and ensure disease-free survival. In our postoperative analysis, we also found that, when the3D images were superimposed 3D-printed model using a see-through integral video graphy display device, our senses of depth perception and motion parallax were improved, compared with that which we had experienced intraoperatively using the videobased AR display system.

Staging, resectability, and outcome in 225 patients with hilar cholangiocarcinoma.

Robert Burke,  Leslie H Blumgart,  Ronald DeMatteo … (2001)
To analyze resectability and survival in patients with hilar cholangiocarcinoma according to a proposed preoperative staging scheme that fully integrates local, tumor-related factors. In patients with hilar cholangiocarcinoma, long-term survival depends critically on complete tumor resection. The current staging systems ignore factors related to local tumor extent, preclude accurate preoperative disease assessment, and correlate poorly with resectability and survival. Demographics, results of imaging studies, surgical findings, pathology, and survival were analyzed prospectively in consecutive patients. Using data from imaging studies, all patients were placed into one of three stages based on the extent of ductal involvement by tumor, the presence or absence of portal vein compromise, and the presence or absence of hepatic lobar atrophy. From March 1991 through December 2000, 225 patients were evaluated, 77% of whom were seen and treated within the last 6 years. Sixty-five patients had unresectable disease; 160 patients underwent exploration with curative intent. Eighty patients underwent resection: 62 (78%) had a concomitant hepatic resection and 62 (78%) had an R0 resection (negative histologic margins). Negative histologic margins, concomitant partial hepatectomy, and well-differentiated tumor histology were associated with improved outcome after all resections. However, in patients who underwent an R0 resection, concomitant partial hepatectomy was the only independent predictor of long-term survival. Of the 9 actual 5-year survivors (of 30 at risk), all had a concomitant hepatic resection and none had tumor-involved margins; 3 of these 9 patients remained free of disease at a median follow-up of 88 months. The rates of complications and death after resection were 64% and 10%, respectively. In the 219 patients whose disease could be staged, the proposed system predicted resectability and the likelihood of an R0 resection and correlated with metastatic disease and survival. By taking full account of local tumor extent, the proposed staging system for hilar cholangiocarcinoma accurately predicts resectability, the likelihood of metastatic disease, and survival. Complete resection remains the only therapy that offers the possibility of long-term survival, and hepatic resection is a critical component of the surgical approach.

Hilar Cholangiocarcinoma: patterns of spread, the importance of hepatic resection for curative operation, and a presurgical clinical staging system.

W Jarnagin,  Robert Burke,  Kim Y. Fong … (1998)
To determine the resectability rate for hilar cholangiocarcinoma, to analyze reasons for unresectability, and to devise a presurgical clinical T-staging system. Ninety patients with hilar cholangiocarcinomas seen between March 1, 1991, and April 1, 1997, were evaluated. Accurate patterns of disease progression and therapy were evaluable. Disease was staged in 87 patients using extent of ductal tumor involvement, portal vein compromise, and liver atrophy. In 21 patients, disease was deemed unresectable for cure at presentation. In 39 patients, disease was found to be unresectable at laparotomy, 23 secondary to nodal (N2) or distant metastases. Unresectability was the result of metastases in 52% and of locally advanced disease in 28%. Thirty patients (33%) had resection of all gross disease, and 25 of these (83%) had negative histologic margins. Twenty-two patients underwent partial hepatectomy. The 30-day mortality rate was 7%. Projected survival is greater than 60 months in those with a negative histologic margin, with a median follow-up of 26 months. A presurgical T-staging system allows presurgical selection for therapy, predicts partial hepatectomy, and offers an index of prognosis. In half the patients, unresectability is mainly the result of intraabdominal metastases. Presurgical imaging predicts unresectability based on local extension but is poor for assessing nodal metastases. In one third of patients, disease can be resected for cure with a long median survival. Curative resection depends on negative margins, and hepatic resection is necessary to achieve this. The T-staging system correlates with resectability, the need for hepatectomy, and overall survival.

H Bismuth,  Neil T. Diamond,  R Nakache (1991)
Between 1960 and 1990, resection was performed in 23 of 122 patients who underwent surgical treatment for hilar cholangiocarcinoma. Local excision of the lesion alone was performed in 10 cases (43%). Hepatic resection for tumor extending to the secondary bile ducts or hepatic parenchyma was performed in 13 cases (57%): extended right hepatectomy (3), right hepatectomy (1), extended left hepatectomy (6), left hepatectomy (2), and left lobectectomy (1). In three other cases, resection by total hepatectomy and liver transplantation was performed, but these were not included in the analysis of results for resection. Significant operative complications occurred in only two cases (8.7%), and the operative mortality rate was zero. In four cases, complete excision of the tumor could not be achieved macroscopically (macroscopic curative resection rate 19/122; 15.6%). In nine cases, the margins of the resected specimens were free from tumor on histologic examination (microscopic curative resection rate, 9/122; 7.4%). In 10 cases, the resection margins were found to contain tumor on histologic examination. The overall survival rate was 87% at 1 year, 63% at 2 years, and 25% at 3 years (median survival, 24 months). The survival and freedom from recurrence rates for patients with free resection margins was superior to that for patients with involved resection margins or residual macroscopic disease. A potentially curative resection, with histologically negative margins and no recurrence to date, was achieved in seven patients using the following procedures: local excision for two type I lesions; left hepatectomy plus excision of segment 1 for two type IIIb lesions and one type IV lesion; right hepatectomy and right hepatectomy plus excision of segment 1 for two type IIIa lesions. These results indicate that improved survival in hilar cholangiocarcinoma can be achieved by resection, with minimal morbidity and zero mortality rates, if histologically free resection margins are obtained. To achieve this, we recommend the following procedures for each type of lesion, based on our experience and on anatomic considerations: local excision for type I; local excision plus resection of segment 1 for type II; local excision, resection of segment 1, and right or left hepatectomy for types IIIa and b; hepatectomy plus liver transplantation for type IV.

This is an open access article distributed under the Creative Commons Attribution-ShareAlike License 4.0, which allows others to remix, tweak, and build upon the work, even for commercial purposes, as long as the author is credited and the new creations are licensed under the identical terms. http://creativecommons.org/licenses/by-sa/4.0