A study on patient satisfaction with psychiatric services 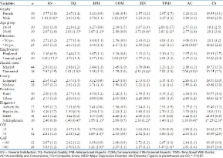 Patient satisfaction with psychiatric services is an important construct, which influences multiple areas including treatment adherance and outcome. There is paucity of studies from India in this area.

To measure satisfaction of psychiatric outpatients of Mental Health Institute, Cuttack, and to assess the relationship between demographic and clinical variables with different domains of patient satisfaction.

Participants ( n=60) were selected randomly. Satisfaction was assessed by Patient Satisfaction Questionnaire–18 (PSQ-18) and the diagnoses were based on the Diagnostic and Statistical Manual-IV-TR. Severity of psychiatric disorder was measured using Clinical Global Impression-severity scale. The functioning level was assessed by Global Assessment of Functioning.

Diagnostic break-up of the patients included anxiety disorder (36.6%), major depressive disorder (30.0%), bipolar disorder (16.6%), and schizophrenia (16.6%). Greatest level of satisfaction was noted in interpersonal aspects (71.4%) and time spent with doctors (62.4%). General satisfaction level was a little over 50% (57%). Differences between composite scores of PSQ-18 in the diagnostic categories were statistically significant; patients with depression had the highest score followed by those with anxiety disorder, bipolar, and the least was with schizophrenia patients. There was variability among the demographic and clinical groups regarding the various subscale score of PSQ-18.

Satisfaction of psychiatric outpatients was observed to be different in various clinical and demographic groups and across many domains of satisfaction.

Patient sociodemographic characteristics as predictors of satisfaction with medical care: a meta-analysis.

M C Dornan,  Timothy J. Hall (1989)
A meta-analysis was performed to examine the relation of patients' sociodemographic characteristics to their satisfaction with medical care. The sociodemographic characteristics were age, ethnicity, sex, socioeconomic status (three indices), marital status, and family size. Greater satisfaction was significantly associated with greater age and less education, and marginally significantly associated with being married and having higher social status (scored as a composite variable emphasizing occupational status). The average magnitudes of relations were very small, with age being the strongest correlate of satisfaction (mean r = 0.13). No overall relationship was found for ethnicity, sex, income, or family size. For all sociodemographic variables, the distribution of correlations was significantly heterogeneous, and statistical contrasts revealed the operation of several moderating variables. The meaning of the overall results and their relation to earlier reviews is discussed.