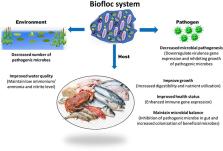 The biofloc system has recently attracted great attention as a cost-effective, sustainable, and environmentally friendly technology and expected to contribute toward human food security (Zero Hunger SDG 2). It is also expected that this endeavor can be adopted widely because of its characteristics of zero water exchange and reduced artificial feeding features. In the biofloc system, the flocs which are generally formed by aggregation of heterotrophic microorganisms, serve as natural bioremediation candidates. These microbes effectively maintain water quality by utilizing the nutrient wastes, mostly originated from digested, unconsumed, and metabolic processes of feed. Additionally, the flocs are important sources of nutrients, mainly a protein source, and when these are consumed by aquaculture animals they improve the growth performance, immunity, and disease tolerance of host against pathogenic microbial infection. Here in this review, we focus on recent advances that could provide a mechanistic insight on how the microbial community developed in the biofloc system helps in the bioremediation process and enhances the overall health of the host. We have also tried to address the possible role of these microbial communities against growth and virulence of pathogenic microbes.

Joseph M Pickard, Melody Y. Zeng, Roberta Caruso … (2017)
The intestinal tract of mammals is colonized by a large number of microorganisms including trillions of bacteria that are referred to collectively as the gut microbiota. These indigenous microorganisms have co-evolved with the host in a symbiotic relationship. In addition to metabolic benefits, symbiotic bacteria provide the host with several functions that promote immune homeostasis, immune responses, and protection against pathogen colonization. The ability of symbiotic bacteria to inhibit pathogen colonization is mediated via several mechanisms including direct killing, competition for limited nutrients, and enhancement of immune responses. Pathogens have evolved strategies to promote their replication in the presence of the gut microbiota. Perturbation of the gut microbiota structure by environmental and genetic factors increases the risk of pathogen infection, promotes the overgrowth of harmful pathobionts, and the development of inflammatory disease. Understanding the interaction of the microbiota with pathogens and the immune system will provide critical insight into the pathogenesis of disease and the development of strategies to prevent and treat inflammatory disease.

M B Miller, B. L. Bassler (2001)
Quorum sensing is the regulation of gene expression in response to fluctuations in cell-population density. Quorum sensing bacteria produce and release chemical signal molecules called autoinducers that increase in concentration as a function of cell density. The detection of a minimal threshold stimulatory concentration of an autoinducer leads to an alteration in gene expression. Gram-positive and Gram-negative bacteria use quorum sensing communication circuits to regulate a diverse array of physiological activities. These processes include symbiosis, virulence, competence, conjugation, antibiotic production, motility, sporulation, and biofilm formation. In general, Gram-negative bacteria use acylated homoserine lactones as autoinducers, and Gram-positive bacteria use processed oligo-peptides to communicate. Recent advances in the field indicate that cell-cell communication via autoinducers occurs both within and between bacterial species. Furthermore, there is mounting data suggesting that bacterial autoinducers elicit specific responses from host organisms. Although the nature of the chemical signals, the signal relay mechanisms, and the target genes controlled by bacterial quorum sensing systems differ, in every case the ability to communicate with one another allows bacteria to coordinate the gene expression, and therefore the behavior, of the entire community. Presumably, this process bestows upon bacteria some of the qualities of higher organisms. The evolution of quorum sensing systems in bacteria could, therefore, have been one of the early steps in the development of multicellularity.

This article was submitted to Microbiotechnology, a section of the journal Frontiers in Microbiology