Hypopituitarism after Orthohantavirus Infection: What is Currently Known? 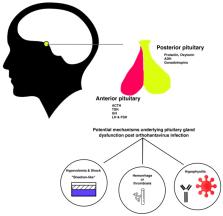 A global perspective on hantavirus ecology, epidemiology, and disease.

Colleen Jonsson,  Luiz Tadeu Moraes Figueiredo,  Olli Vapalahti (2010)
Hantaviruses are enzootic viruses that maintain persistent infections in their rodent hosts without apparent disease symptoms. The spillover of these viruses to humans can lead to one of two serious illnesses, hantavirus pulmonary syndrome and hemorrhagic fever with renal syndrome. In recent years, there has been an improved understanding of the epidemiology, pathogenesis, and natural history of these viruses following an increase in the number of outbreaks in the Americas. In this review, current concepts regarding the ecology of and disease associated with these serious human pathogens are presented. Priorities for future research suggest an integration of the ecology and evolution of these and other host-virus ecosystems through modeling and hypothesis-driven research with the risk of emergence, host switching/spillover, and disease transmission to humans.

Olli Vapalahti,  Jukka Mustonen,  Åke Lundkvist … (2003)
Hantaviruses are enveloped RNA viruses each carried by a specific rodent species. Three hantaviruses, Puumala, Dobrava, and Saaremaa viruses, are known to cause haemorrhagic fever with renal syndrome. In Europe. Puumala causes a generally mild disease, nephropathia epidemica, which presents most commonly with fever, headache, gastrointestinal symptoms, impaired renal function, and blurred vision, whereas Dobrava infections often also have haemorrhagic complications. There are few available data about the clinical picture of confirmed Saaremaa infections, but epidemiological evidence suggests that it is less pathogenic than Dobrava, and that Saaremaa infections are more similar to nephropathia epidemica caused by Puumala. Along with its rodent host, the bank vole (Clethrionomys glareolus), Puumala is reported throughout most of Europe (excluding the Mediterranean region), whereas Dobrava, carried by the yellow-necked mouse (Apodemus flavicollis), and Saaremaa, carried by the striped field mouse (Apodemus agrarius), are reported mainly in eastern and central Europe. The diagnosis of acute hantavirus infection is based on the detection of virus-specific IgM. Whereas Puumala is distinct, Dobrava and Saaremaa are genetically and antigenically very closely related and were previously thought to be variants of the same virus. Typing of a specific hantavirus infection requires neutralisation antibody assays or reverse transcriptase PCR and sequencing.

Ezio Ghigo,  Ilonka Kreitschmann-Andermahr,  Gianluca Aimaretti … (2007)
Incidence and prevalence of hypopituitarism are estimated to be 4.2 per 100,000 per year and 45.5 per 100,000, respectively. Although the clinical symptoms of this disorder are usually unspecific, it can cause life-threatening events and lead to increased mortality. Current research has refined the diagnosis of hypopituitarism. Identification of growth hormone and corticotropin deficiency generally requires a stimulation test, whereas other deficiencies can be detected by basal hormones in combination with clinical judgment. Newly developed formulations of replacement hormones are convenient and physiological. Work has shown that many patients with brain damage--such as traumatic brain injury or aneurysmal subarachnoid haemorrhage--are at high risk of (sometimes unrecognised) hypopituitarism. Thus, a much increased true prevalence of this disorder needs to be assumed. As a result, hypopituitarism is not a rare disease and should be recognised by the general practitioner.