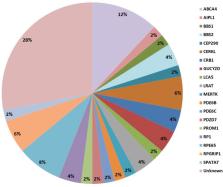 In this study, we performed targeted next-generation sequencing based on molecular inversion probes (MIPs) that allowed the sequence analysis of 108 IRD-associated genes in 50 Iranian IRD probands.

Employing a cost-effective targeted next-generation sequencing procedure, we identified the genetic causes of different retinal disorders in the majority of Iranian families in this study.

A F Deutman,  Erik Bergen,  N Tijmes … (1998)
Ophthalmological and molecular genetic studies were performed in a consanguineous family with individuals showing either retinitis pigmentosa (RP) or cone-rod dystrophy (CRD). Assuming pseudodominant (recessive) inheritance of allelic defects, linkage analysis positioned the causal gene at 1p21-p13 (lod score 4.22), a genomic segment known to harbor the ABCR gene involved in Stargardt's disease (STGD) and age-related macular degeneration (AMD). We completed the exon-intron structure of the ABCR gene and detected a severe homozygous 5[prime] splice site mutation, IVS30+1G->T, in the four RP patients. The five CRD patients in this family are compound heterozygotes for the IVS30+1G->T mutation and a 5[prime] splice site mutation in intron 40 (IVS40+5G->A). Both splice site mutations were found heterozygously in two unrelated STGD patients, but not in 100 control individuals. In these patients the second mutation was either a missense mutation or unknown. Since thus far no STGD patients have been reported to carry two ABCR null alleles and taking into account that the RP phenotype is more severe than the STGD phenotype, we hypothesize that the intron 30 splice site mutation represents a true null allele. Since the intron 30 mutation is found heterozygously in the CRD patients, the IVS40+5G->A mutation probably renders the exon 40 5[prime] splice site partially functional. These results show that mutations in the ABCR gene not only result in STGD and AMD, but can also cause autosomal recessive RP and CRD. Since the heterozygote frequency for ABCR mutations is estimated at 0.02, mutations in ABCR might be an important cause of autosomal recessive and sporadic forms of RP and CRD.

The last two authors are senior authors for this study.

This is an open-access article distributed under the terms of the Creative Commons Attribution License, which permits unrestricted use, distribution, and reproduction in any medium, provided the original work is properly cited, used for non-commercial purposes, and is not altered or transformed.