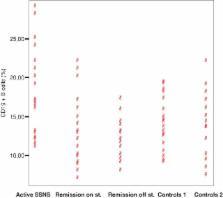 Maria Salsano,  Giuseppina Tirino,  Adriana Borriello … (2002)
We investigated lymphocyte subpopulations and the production of cytokines by T helper cell subtype 1 (Th1), Th2, and monocytes/macrophages (tumor necrosis factor-alpha [TNF-alpha]) in peripheral-blood mononuclear cells of 18 children with steroid-sensitive (SS) nephrotic syndrome (NS) and 10 children with steroid-resistant (SR) NS. Mean age was 10.9 +/- 5.7 years, with a mean follow-up before the study of 6 +/- 5 years. To evaluate the possible relationship between cytokine levels and response to treatment, patients with SS and SR NS were assessed during relapse/marked proteinuria (group A), total/partial remission (group B), and off treatment (group C). In children with SS and SR NS, we found no significant difference in CD3 counts compared with controls. The proportion of CD4 cells decreased significantly in relapse and off therapy compared with controls in children with SS NS, whereas in those with SR NS, there was a concomitant reduction in all groups. B-Lymphocyte counts were significantly increased in either group versus controls. In SR NS, CD8 and natural killer cell levels increased during relapse versus controls. The CD4+/CD8+ ratio was reduced to the same degree in those with SS and SR NS. In patients with SR NS, we observed increased levels of soluble interleukin-2 (IL-2) receptor (sIL-2R) from corresponding control values (P < 0.01). A significant increase in TNF-alpha levels was found in patients with SS and SR NS versus controls. High levels of IL-2, sIL-2R, and interferon-gamma during relapse in patients with SS NS give further evidence for a Th1 pattern that might be involved in the pathogenesis of NS, and monitoring the Th1/Th2 balance would be useful in evaluating the response to therapy. Copyright 2002 by the National Kidney Foundation, Inc.

Hélène François,  Eric Daugas,  Albert Bensman … (2007)
Nephrotic syndrome secondary to minimal change disease (MCNS) usually is considered to have a good renal prognosis, but frequency of relapses and steroid dependency are therapeutic challenges to physicians. Treatment of patients with multiple relapses remains controversial because few control studies are available. We report the case of a 23-year-old woman of Malian origin who experienced more than 30 relapses of MCNS. Long-term remission was observed only with rituximab (anti-CD20 antibody) treatment after step-by-step use of all currently available medications for MCNS were unsuccessful. Our observation is the first report of efficacy of rituximab during multirelapsing MCNS in an adult patient with a significant follow-up and no adjuvant therapy. This case suggests a role of B cells in MCNS, possibly by regulating T-cell function.