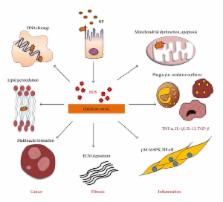 The rapidly emerging field of nanotechnology has offered innovative discoveries in the medical, industrial, and consumer sectors. The unique physicochemical and electrical properties of engineered nanoparticles (NP) make them highly desirable in a variety of applications. However, these novel properties of NP are fraught with concerns for environmental and occupational exposure. Changes in structural and physicochemical properties of NP can lead to changes in biological activities including ROS generation, one of the most frequently reported NP-associated toxicities. Oxidative stress induced by engineered NP is due to acellular factors such as particle surface, size, composition, and presence of metals, while cellular responses such as mitochondrial respiration, NP-cell interaction, and immune cell activation are responsible for ROS-mediated damage. NP-induced oxidative stress responses are torch bearers for further pathophysiological effects including genotoxicity, inflammation, and fibrosis as demonstrated by activation of associated cell signaling pathways. Since oxidative stress is a key determinant of NP-induced injury, it is necessary to characterize the ROS response resulting from NP. Through physicochemical characterization and understanding of the multiple signaling cascades activated by NP-induced ROS, a systemic toxicity screen with oxidative stress as a predictive model for NP-induced injury can be developed.

Comparison of the mechanism of toxicity of zinc oxide and cerium oxide nanoparticles based on dissolution and oxidative stress properties.

Andre E. Nel,  Haibin Shi,  Lutz Mädler … (2008)
Nanomaterials (NM) exhibit novel physicochemical properties that determine their interaction with biological substrates and processes. Three metal oxide nanoparticles that are currently being produced in high tonnage, TiO(2), ZnO, and CeO(2), were synthesized by flame spray pyrolysis process and compared in a mechanistic study to elucidate the physicochemical characteristics that determine cellular uptake, subcellular localization, and toxic effects based on a test paradigm that was originally developed for oxidative stress and cytotoxicity in RAW 264.7 and BEAS-2B cell lines. ZnO induced toxicity in both cells, leading to the generation of reactive oxygen species (ROS), oxidant injury, excitation of inflammation, and cell death. Using ICP-MS and fluorescent-labeled ZnO, it is found that ZnO dissolution could happen in culture medium and endosomes. Nondissolved ZnO nanoparticles enter caveolae in BEAS-2B but enter lysosomes in RAW 264.7 cells in which smaller particle remnants dissolve. In contrast, fluorescent-labeled CeO(2) nanoparticles were taken up intact into caveolin-1 and LAMP-1 positive endosomal compartments, respectively, in BEAS-2B and RAW 264.7 cells, without inflammation or cytotoxicity. Instead, CeO(2) suppressed ROS production and induced cellular resistance to an exogenous source of oxidative stress. Fluorescent-labeled TiO(2) was processed by the same uptake pathways as CeO(2) but did not elicit any adverse or protective effects. These results demonstrate that metal oxide nanoparticles induce a range of biological responses that vary from cytotoxic to cytoprotective and can only be properly understood by using a tiered test strategy such as we developed for oxidative stress and adapted to study other aspects of nanoparticle toxicity.

Comparison of the abilities of ambient and manufactured nanoparticles to induce cellular toxicity according to an oxidative stress paradigm.

Tian Xia,  Michael Kovochich,  Jonathan A Brant … (2006)
Nanomaterial properties differ from those bulk materials of the same composition, allowing them to execute novel activities. A possible downside of these capabilities is harmful interactions with biological systems, with the potential to generate toxicity. An approach to assess the safety of nanomaterials is urgently required. We compared the cellular effects of ambient ultrafine particles with manufactured titanium dioxide (TiO2), carbon black, fullerol, and polystyrene (PS) nanoparticles (NPs). The study was conducted in a phagocytic cell line (RAW 264.7) that is representative of a lung target for NPs. Physicochemical characterization of the NPs showed a dramatic change in their state of aggregation, dispersibility, and charge during transfer from a buffered aqueous solution to cell culture medium. Particles differed with respect to cellular uptake, subcellular localization, and ability to catalyze the production of reactive oxygen species (ROS) under biotic and abiotic conditions. Spontaneous ROS production was compared by using an ROS quencher (furfuryl alcohol) as well as an NADPH peroxidase bioelectrode platform. Among the particles tested, ambient ultrafine particles (UFPs) and cationic PS nanospheres were capable of inducing cellular ROS production, GSH depletion, and toxic oxidative stress. This toxicity involves mitochondrial injury through increased calcium uptake and structural organellar damage. Although active under abiotic conditions, TiO2 and fullerol did not induce toxic oxidative stress. While increased TNF-alpha production could be seen to accompany UFP-induced oxidant injury, cationic PS nanospheres induced mitochondrial damage and cell death without inflammation. In summary, we demonstrate that ROS generation and oxidative stress are a valid test paradigm to compare NP toxicity. Although not all materials have electronic configurations or surface properties to allow spontaneous ROS generation, particle interactions with cellular components are capable of generating oxidative stress.

B H Laurence,  D Warheit,  Laura Reed … (2003)
The aim of this study was to evaluate the acute lung toxicity of intratracheally instilled single-wall carbon nanotubes (SWCNT) in rats. The lungs of rats were instilled either with 1 or 5 mg/kg of the following control or particle types: (1) SWCNT, (2) quartz particles (positive control), (3) carbonyl iron particles (negative control), (4) phosphate-buffered saline (PBS) + 1% Tween 80, or (5) graphite particles (lung tissue studies only). Following exposures, the lungs of PBS and particle-exposed rats were assessed using bronchoalveolar lavage (BAL) fluid biomarkers and cell proliferation methods, and by histopathological evaluation of lung tissue at 24 h, 1 week, 1 month, and 3 months postinstillation. Exposures to high-dose (5 mg/kg) SWCNT produced mortality in ~15% of the SWCNT-instilled rats within 24 h postinstillation. This mortality resulted from mechanical blockage of the upper airways by the instillate and was not due to inherent pulmonary toxicity of the instilled SWCNT particulate. Exposures to quartz particles produced significant increases versus controls in pulmonary inflammation, cytotoxicity, and lung cell parenchymal cell proliferation indices. Exposures to SWCNT produced transient inflammatory and cell injury effects. Results from the lung histopathology component of the study indicated that pulmonary exposures to quartz particles (5 mg/kg) produced dose-dependent inflammatory responses, concomitant with foamy alveolar macrophage accumulation and lung tissue thickening at the sites of normal particle deposition. Pulmonary exposures to carbonyl iron or graphite particles produced no significant adverse effects. Pulmonary exposures to SWCNT in rats produced a non-dose-dependent series of multifocal granulomas, which were evidence of a foreign tissue body reaction and were nonuniform in distribution and not progressive beyond 1 month postexposure (pe). The observation of SWCNT-induced multifocal granulomas is inconsistent with the following: (1) lack of lung toxicity by assessing lavage parameters, (2) lack of lung toxicity by measuring cell proliferation parameters, (3) an apparent lack of a dose response relationship, (4) nonuniform distribution of lesions, (5) the paradigm of dust-related lung toxicity effects, (6) possible regression of effects over time. In addition, the results of two recent exposure assessment studies indicate very low aerosol SWCNT exposures at the workplace. Thus, the physiological relevance of these findings should ultimately be determined by conducting an inhalation toxicity study.