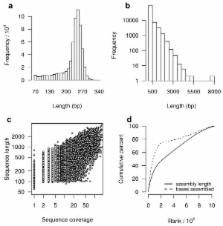 New methods are needed for genomic-scale analysis of emerging model organisms that exemplify important biological questions but lack fully sequenced genomes. For example, there is an urgent need to understand the potential for corals to adapt to climate change, but few molecular resources are available for studying these processes in reef-building corals. To facilitate genomics studies in corals and other non-model systems, we describe methods for transcriptome sequencing using 454, as well as strategies for assembling a useful catalog of genes from the output. We have applied these methods to sequence the transcriptome of planulae larvae from the coral Acropora millepora.

More than 600,000 reads produced in a single 454 sequencing run were assembled into ~40,000 contigs with five-fold average sequencing coverage. Based on sequence similarity with known proteins, these analyses identified ~11,000 different genes expressed in a range of conditions including thermal stress and settlement induction. Assembled sequences were annotated with gene names, conserved domains, and Gene Ontology terms. Targeted searches using these annotations identified the majority of genes associated with essential metabolic pathways and conserved signaling pathways, as well as novel candidate genes for stress-related processes. Comparisons with the genome of the anemone Nematostella vectensis revealed ~8,500 pairs of orthologs and ~100 candidate coral-specific genes. More than 30,000 SNPs were detected in the coral sequences, and a subset of these validated by re-sequencing.

The methods described here for deep sequencing of the transcriptome should be widely applicable to generate catalogs of genes and genetic markers in emerging model organisms. Our data provide the most comprehensive sequence resource currently available for reef-building corals, and include an extensive collection of potential genetic markers for association and population connectivity studies. The characterization of the larval transcriptome for this widely-studied coral will enable research into the biological processes underlying stress responses in corals and evolutionary adaptation to global climate change.

Gene Ontology: tool for the unification of biology

The Bioperl toolkit: Perl modules for the life sciences.

Jason E Stajich, David Block, Kris Boulez … (2002)
The Bioperl project is an international open-source collaboration of biologists, bioinformaticians, and computer scientists that has evolved over the past 7 yr into the most comprehensive library of Perl modules available for managing and manipulating life-science information. Bioperl provides an easy-to-use, stable, and consistent programming interface for bioinformatics application programmers. The Bioperl modules have been successfully and repeatedly used to reduce otherwise complex tasks to only a few lines of code. The Bioperl object model has been proven to be flexible enough to support enterprise-level applications such as EnsEMBL, while maintaining an easy learning curve for novice Perl programmers. Bioperl is capable of executing analyses and processing results from programs such as BLAST, ClustalW, or the EMBOSS suite. Interoperation with modules written in Python and Java is supported through the evolving BioCORBA bridge. Bioperl provides access to data stores such as GenBank and SwissProt via a flexible series of sequence input/output modules, and to the emerging common sequence data storage format of the Open Bioinformatics Database Access project. This study describes the overall architecture of the toolkit, the problem domains that it addresses, and gives specific examples of how the toolkit can be used to solve common life-sciences problems. We conclude with a discussion of how the open-source nature of the project has contributed to the development effort.

N. H. Putnam, M Srivastava, U Hellsten … (2007)
Sea anemones are seemingly primitive animals that, along with corals, jellyfish, and hydras, constitute the oldest eumetazoan phylum, the Cnidaria. Here, we report a comparative analysis of the draft genome of an emerging cnidarian model, the starlet sea anemone Nematostella vectensis. The sea anemone genome is complex, with a gene repertoire, exon-intron structure, and large-scale gene linkage more similar to vertebrates than to flies or nematodes, implying that the genome of the eumetazoan ancestor was similarly complex. Nearly one-fifth of the inferred genes of the ancestor are eumetazoan novelties, which are enriched for animal functions like cell signaling, adhesion, and synaptic transmission. Analysis of diverse pathways suggests that these gene "inventions" along the lineage leading to animals were likely already well integrated with preexisting eukaryotic genes in the eumetazoan progenitor.