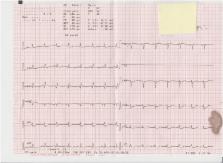 ST segment elevation is the most common electrocardiographic finding in acute myocardial infarction. ST elevation in chest leads generally represents left anterior descending artery occlusion, while elevation in DII and III, and aVF represents right coronary and circumflex artery occlusion. A female patient aged 66 years was admitted to our emergency service with ST elevation in leads DIII and aVF. A diagnosis of acute inferior myocardial infarction was made. The patient’s history included coronary artery bypass graft involving the left internal mammary artery to the left anterior descending coronary artery and aorta to the right coronary artery. The patient was taken to the cardiac catheterization laboratory for primary percutaneous coronary intervention and a lesion in the left anterior descending artery was identified. Additionally, the left subclavian artery was totally occluded. Following intervention to the lesion, the patient was discharged on day 4 of admission.

Usefulness of ST-segment elevation in lead III exceeding that of lead II for identifying the location of the totally occluded coronary artery in inferior wall myocardial infarction.

Peter Zimetbaum,  Subramaniam Krishnan,  Alexander Gold … (1998)
The presence of ST-segment elevation in lead III exceeding that of lead II, particularly if combined with ST elevation in lead V1, proved to be a powerful marker for occlusion of the proximal or midportion of the right coronary artery. These findings helped to determine the extent of myocardium at risk in inferior wall myocardial infarction and may further guide the decision to administer thrombolytics.

The value of the right precordial leads of the electrocardiogram.